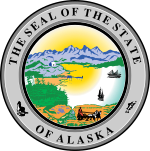 This Week at Interior

Welcome to the Tlingit Tribe of  YAKUTAT, Alaska, the Last Frontier!

Thinking of taking a memorable cruise next Summer? Head for Yakutat and Glacier Bay to meet our MDFDE Haida-Tlingit Team & Friends in Alaska! E.J.

At the Glacier’s Edge: People, Seals, and History at Yakutat Bay

“We want people to care about who we are and understand that we still live and breathe the same way we did a thousand years ago.”

Victoria Demmert, President of the Tlingit Tribe of Yakutat, Alaska.

I am deeply honored to inform you of the nomination of my very dear Tlingit friend Judy DAXOOTSU RAMOS as Executive Director of Cultural Affairs MDFDE/Alaska-Yakutat.

In this capacity, Professor Judy RAMOS will be our permanent liaison between the State of Alaska which, as you know, President Barack OBAMA visited in early September to sound once again the alarm bells about climate change – especially visible in Alaska – the largest territory in the United States (665,384.04 square miles or 1/5 of the total land area of the 48 contiguous states); with Glacier Bay National Park & ​​Preserve (NPS) Management Team and the Haida-Tlingit Tribe. And last but not least, she will also help us rally around our MDFDE and said partners the French and Francophones in Alaska to accomplish a long-term complicated project together – a very important initiative officially started by your President under the patronage of the French Embassy in Washington D.C. back in… 2000 – in order to establish a second Memorial La Perouse in the United States (1), honoring the 21 French officers and sailors who drowned on July 13, 1786 at Lituya Bay, Alaska, discovered by La Perouse during his tragic Pacific Expedition (1785-1788).

Born in Yakutat, Alaska, Professor Judy RAMOS is Raven (Yéil) (2) from Yakutat Kwaan, Kwaaski’kwaan/K’ineixkwaan Clan and from the House of Owl. She is daughter of the Coho Salmon Clan, and granddaughter of the Brown Bear Clan, and direct descendant of the Tlingits from Lituya Bay who met and traded with the French Captain Jean-François Galaup de La Pérouse, our legendary Pacific explorer, during his month stay in Alaska.

Professor Ramos received her BA in Anthropology from the University of Alaska Anchorage and her MA in Teaching Adult Education from Alaska Pacific University.

Judith Ramos is an Assistant Professor and PhD student, member of the Faculty of the University of Alaska Fairbanks, Department of Alaska Native Studies and Rural Development, where she teaches from mid-August to mid-May. Passionate about working with Indigenous Communities to help them become more self-reliant, she continues working for the Yakutat Tlingit Tribe in the summer on trying to find funds for a Museum/Archives, a real challenge because of the current down-turn in the Alaska economy.

Prof. Ramos is part of a multidisciplinary team studying the ancient, historical, and contemporary harvest of harbor seals at ice-floe pupping grounds near Hubbard Glacier in Yakutat, Alaska. The results of this study are relevant to questions of human adaptation and resiliency in the changing North to the Challenge of building coherence between indigenous and scientific knowledge systems.

It is therefore with great “laperousian emotion” that I welcome aboard our MDFDE my friend Judy Ramos with a huge “Gunalchéesh”, a warm “Thank you” in Tlingit language I personally want to extend to Byron I. Mallott, the new Lt. Gov. Alaska, a proud member of the Yakutat Tlingit Tribe. Go Team MDFDE/Alaska-Yakutat!

Shipwreck of La Pérouse’s two Shallops on July 13, 1786 at Port-des
Français (Lituya Bay), site of a mega-tsunami, the largest ever recorded
in History (1958) – Painting by Louis-Philippe Crépin, 1806.

“It was at the back of this bay (Port-des-Français/Lituya Bay) that we hoped to find channels by which we could enter into the interior of America. We supposed that it might lead to some great river running between two mountains, and that this river might have its source in one of the great lakes of Northern Canada. This was our hope and this was the result…

At the entrance of this port twenty-one brave sailors perished. Whoever you are, mix your tears with ours. The Indians seemed to share our sorrow; it is extreme. Saddened by tragedy, but not discouraged, we set sail to continue our voyage on July 30th.”

(1) The first La Perouse Memorial in the United States of America was established at La Perouse Bay in Maui, Hawai’i, by Ms. Elisabeth Jenssen in the presence of the Marine nationale (the French Navy), which travelled all the way from Tahiti (French Polynesia) to Lahaina, Maui – eight days at sea – on May 30th, 1994. Today, it is the most visited historic site (+ 1,000 international visitors/day) of the most visited Island in the world (+ 2.5 millions visitors/year) discovered by La Pérouse on May 30, 1786; and where we will be celebrating the 230th Anniversary of La Pérouse’s landing next year. Ms. Jenssen also established a Sister City relationship between Maui County and Albi (Tarn), France, La Pérouse’s birthplace, on March 2, 2001…

In parallel to more than 25 years of her La Perouse research and cultural realizations archived at the Château of Versailles, France, Ms. Elisabeth Jenssen, Founder & President of the Mouvement des Français de l’Étranger (MDFDE), French & Francophones Abroad, The Laperouse Foundation USA/Friends of La Perouse, has been advocating to establish a La Perouse Memorial in Alaska since 2000.

(2) “Tlingit people are born into their identity through a matrilineal clan system: One’s identity is established through the mother’s clan. All Tlingit clans (Naa) are subdivided into houses from various kwáans (region or village) and organized into two major moieties: Raven (Yeil) and Eagle (Ch’aak).” Excerpt from Ms. Elisabeth Jenssen “La Pérouse in America” (From The American War of Independence to the Pacific Exploration) with Foreword by Mr. Robin Inglis, Director of the Vancouver Maritime Museum (1982-1991) published in France and the United States in the Fall of 2016.

The project addresses the ancient, historical, and contemporary harvest of harbor seals at ice-floe pupping grounds near Hubbard Glacier and how Late Holocene climate change gave birth to this long-lived hunting practice. Indigenous knowledge, combined with material and chronometric evidence derived from archaeology and glacial studies, describes the evolving physical and cultural landscape of Yakutat Bay, where glacial recession after A.D. 1100 opened the fiord for colonization by harbor seals and for successive waves of Sugpiaq, Eyak, Ahtna, and Tlingit settlement. The project was inspired by George Ramos Sr., L’uknax.adí Tlingit clan elder and traditional scholar, who learned the names and locations of ancestral sealing camps during his training as a young hunter. In his words and those of other Yakutat elders, the seals are the glacier’s gift to the people, and have sustained their way of life for centuries. 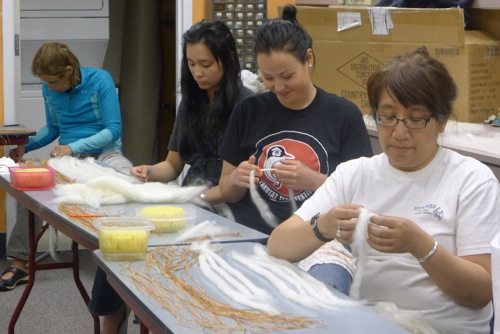 What’s So Special About Glacier Bay?

“It is especially poignant that this opportunity to build connections between the American public and the Huna Tlingit will be completed during the centennial year of the National Park Service.” The Huna Tribal House is currently under construction in Bartlett Cove! NPS

In October, 2010 the Hoonah Indian Association (HIA) hosted a ceremony to bless two large red cedar logs. This cultural blessing was a way to thank the trees for their contribution to a significant project. Four feet in diameter and 40 feet long, the massive logs will be used to create a carved house screen, the first component of a replica Tlingit plank house to be constructed in Glacier Bay National Park. Part of a long range design plan since 1998, the Huna Tribal House will be constructed along the waterfront of Bartlett Cove, providing the Huna Tlingit the first permanent plank house in their ancestral homeland since their village was destroyed by an advancing glacier over 250 years ago.

The design is based on accounts and photographs from the historical and ethnographic records. These ingenious buildings had gabled roofs held up by four interior posts that supported two massive horizontal beams upon which the rest of the roofing members rested. The walls and floors were of thick, adze finished planks. Inside were square pits, about 25 feet to a side and about 4 feet deep, where daily life circulated around a central hearth. They traditionally housed extended families and a cluster of houses would comprise a clan’s winter village. Multiple clans would reside together, and legends tell us that the principal pre-Little Ice Age village of the four Huna clans was located in what is now Bartlett Cove.

Follow along and enjoy images and videos of this exciting project as it develops. New photos added regularly! The houses were filled with the sacred objects and art that spoke of the clan’s origins and histories. These objects consisted of carved and painted interior house posts and partition screens, exterior rain screens and totem poles, and a variety of household items. Glacier Bay National Park and HIA have initiated a project to create these components through a series of workshops in Hoonah. Cultural elements for the tribal house are currently being crafted in Hoonah by local native artists. In 2011, carvers Gordon Greenwald, Owen James, Herb Sheakley, and Louie White, Jr. completed an elaborately carved and painted house screen which will serve as the centerpiece of the house interior. The screen depicts the stories of the four Glacier Bay clans and commemorates their deep connection to their Glacier Bay homeland. Carvers also completed four highly ornamented cedar house posts for the interior. This year, the artisans are working on a spectacular wooden exterior house screen which depicts Raven and Eagle, the two principal crests of Tlingit clans.

The screen and house posts are currently on display in nearby Hoonah, but will eventually be incorporated into the Bartlett Cove tribal house. Once completed, the structure will serve as an interpretive center where visitors can learn about Tlingit culture and a venue where Tlingit communities and organizations can offer cultural workshops on topics such as Native art, woodworking, weaving, song and dance, healthy living, and more.