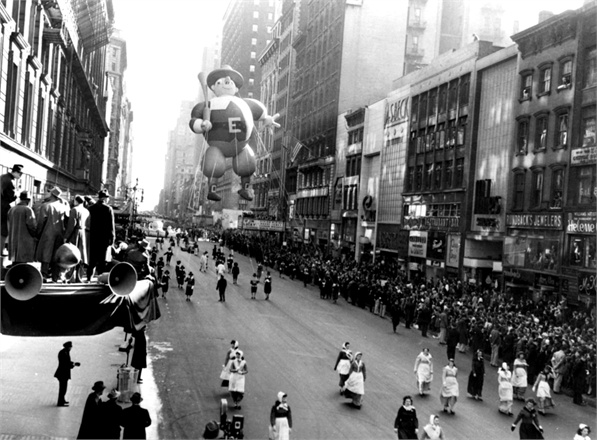 Dear members of the MDFDE, my fellow Americans,

Happy Thanksgiving Day everyone! How are you doing? How are we feeling as a nation? Having difficulty counting your blessings this year? Don’t think we have accomplished much to be proud of in the name of Friendship and Peace since last year? Running out of inspiration on how to stay united? Well, all the more reason to get our Thanksgiving spirit back by learning from our glorious past… When two years after the end of WWII, the United States–EVERY SINGLE STATE and U.S. TERRITORY thanks to America’s favorite columnist DREW PEARSON and his Friendship Food Train–literally saved Europe from starvation…

70 years ago this month… America was shining, leading by laying the plans for Europe’s reconstruction. On Nov. 10, 1947, President Truman, knowing all too well famine was now his “enemy number one,” used his Thanksgiving Proclamation to call on all Americans to rise to the challenge overseas. He reminded everyone what Thanksgiving was all about:

“May our thanksgiving this year be tempered by humility, by sympathy for those who lack abundance, and by compassion for those in want. As we express appreciation in prayer for our munificent gifts, may we remember that it is more blessed to give than to receive; and may we manifest our remembrance of that precept by generously sharing our bounty with needy people of other nations.

Now, Therefore, I, Harry S. Truman, President of the United States of America, invite the attention of all citizens to the joint resolution of Congress approved December 26, 1941, which designates the fourth Thursday in November of each year as Thanksgiving Day; I proclaim Thursday, November 27, 1947, as a day of national thanksgiving; and I call upon the people of the United States of every faith to consecrate that day to thoughts of gratitude, acts of devotion, and a firm resolve to assist in the efforts being made by religious groups and other bodies to aid the undernourished, the sick, the aged, and all sufferers in war-devastated lands. http://www.presidency.ucsb.edu/ws/index.php?pid=72463

If the message was heard “loud and clear” around the nation and every American was eager to help their fellowmen in Europe… The fact of the matter was that, at this precise time, the Marshall Plan was still a long “work in progress” in Washington…

And then came along Drew PEARSON, one of America’s greatest humanitarians and true peacemonger, with his own European roadmap, a daring plan of action never done before…

If you have been following our exclusive MDFDE coverage of the story of the Friendship Food Train (just giving you a glimpse of the real story here) as part of our super exciting and ambitious project #MDFDEFriendshipMerciTrain70 (2017-2019). You know by now the Friendship Food Train surpassed Drew PEARSON’s expectation with 270 boxcars landing in New York City on Nov. 18, 1947, to be shipped shortly to France and Italy… https://www.francaisdeletranger.org/en/2017/11/18/mdfdeusa-wwii-here-is-to-you-drew-pearson-iv-mdfdefriendshipmercitrain70/

Still in need of an extra dose of inspiration? Just think of your parents or grandparents who fought for our Freedom. Think of our veterans, the Greatest Generation. Please read Drew Pearson’s own account written while still on board the Southwest Special Friendship Train (see article below and please pass it on to your friends and neighbors) on how all American citizens, communities sticked together vs. adversity and contributed to the enormous success of the Friendship Food Train. All aboard!

The Chronicle-Telegram from Elyria, Ohio on Tuesday November 25, 1947 p.24

A lot of my editors are probably wondering when I am going to quit collecting food and go back to being a newspaperman (so, also, is my wife).

However, when the people of the southwest announce that they’ve been blessed with a big wheat crop and want to share it with others, and when they go out and raise some 150 carloads of wheat with no urging from anyone and no help from their government—then that, in my opinion, is news. Furthermore, it’s invigorating, stimulating news, that I get a lot more kick out of writing about than I do pecking through keyholes in Washington.

One of the hardest things to tell in print, however, is the enthusiasm, the generosity, and the enterprise of the American people when its comes to giving food for friendship. This was the most spontaneous movement toward brotherhood and friendship this country has probably ever seen and chiefly behind (it is the belief that, whereas battleships can win wars, food can win the peace).

FOR TWO weeks now I have been riding three different sections of the Friendship Train, from sunny California, through snowy Wyoming, across the brown plains of Kansas and through the smoke-begrimed industrial cities of Pennsylvania. But, regardless of geography, weather or industry, the response has been equally warm and thrilling.

This has not been government aid from diplomat to diplomat, but from people to people. Every conceivable cross section of American life has co-operated. Railroads and railroad employees, small towns and big towns, all religions, all races, rich and poor—all turned out at the railroad station to help build the bridge of friendship between Europe and the United States.

In Ft. Worth, Texas, big-hearted Amon Carter, who usually gives away broad-brimmed Texas hats, this time gave away 15 carloads of flour (along with other Ft. Worth residents) and had the flour bags especially stamped with messages to the French and Italian people.

In Secausus, N.J., the farmers under the leadership of John J. Kane, sold pigs and contributed the cash equivalent of one pig each to the Friendship Train—total $2,800… David C. White, a big wheat farmer 20 miles south from Dodge City, Kansas, gave five carloads of wheat because, as he expressed it, ” in the 25th chapter of Matthew, Christ says—‘As ye have done unto one of the least of these my brethen, ye have done it unto me’”

Dick Long, managing editor of the Wichita Eagle, practically quit being a newspaperman in order to organize this southwest special of the Friendship train… Hundreds of newspapers used up tons of precious newsprint telling their readers about the train and scores of radio stations sacrificed valuable advertising to do the same.

IN SEDGWICK county, Kansas, the school children collected wastepaper, ran errands, saved their money until they raised enough to buy one whole carload of wheat (and that’s a lot of wheat)… In Philadelphia, the children of the John Bartram High school contributed seven times as much money as the Pennsylvania Manufacturers Association—Joe Grundy’s high-tariff outfit which used to write U.S. tariff laws.

In Grand Island, Nebraska, the Teamsters Union, headed by Bill Noble, furnished twenty men to load cars… In Trenton, N.J. Mrs Laura Marsavitz, a teacher in a negro school, had won a war prize for making parachutes. The prize was a Bible.When the train passed through Trenton she came to the station with her school children and asked that the Bible be sent with the train to Europe.

IN NEWTON, Kansas, the Mennonite church scoured the adjacent wheat-growing counties until 28 cars of wheat and flour were attached to the Friendship Train. . . The tall corn network in Iowa staged an all-out radio drive for food and funds, later reported that, for the first time, people who phoned in to the radio stations pledging money gave more than they pledged.

Down in Texas the eight district managers of the Lions Club worked so intensively that carload after carload came in from all over Texas—Long View, Odessa, Austin, Amarillo, Plainview, Lubbock, Sherman, Beaumont. Other service clubs, plus local radio stations and newspapers, worked with them.

The Rock Island railroad and the Missouri Pacific helped the Santa Fe by bringing these off-the-mainline cars to Wichita, where the Santa Fe southwest special started. In Pennsylvania, the Rending Railroad also cooperated with the Penn RR in hauling off five cars.

Greenville, S. C., decided to attach one boxcar to the Friendship Train, but, before it finished, hooked on two. Reported Broadus Bailey of Greenville: “For many years I have helped our community campaigns, but never have I seen such a voluntary response.”

In Toledo, Ohio, Arthur Wieland, vice president of Willys Overland, organized a fleet of station wagons and jeeps to pick up donations.

Up in the mountains of Central Pennsylvania, well off the main line of the train, Lockhaven and Renovo insisted on loading cars. So did Willsport, Clearfield, Bellefonte, Bedford, Tyrone and other off-line towns.

Because California did not have much time to organize much time the citizens of Berkeley raised $4,000 after the train left. The momentum of Oakland’s drive also carried over, so the energetic Mayor Joseph E. Smith has just reported that city raised a total of $46,613… Los Angeles, the starting point for the first Friendship Train also raised $35,000 after the train left. They couldn’t stop the money from rolling in.

OUT IN Colorado’s dust bowl, Baca county sent two carloads of wheat, the Springfield Colo., Lions club one and Walsh Colo., one— genuine generosity from an area which may not have a crop next year.

And so on and on… The rollcall of American generosity is too long to tabulate here but it’s bills of lading spell out just one thing—the heartfelt desire of millions of Americans to help and to live at peace with their fellow men. (Copyright 1947, by The Bell Syndicate, Inc.) https://www.newspapers.com/newspage/11023017/