Photos: The best photos of the 2018 World Cup French players celebrate with the World Cup trophy after defeating Croatia in the final on Sunday, July 15, 2018. 1 of 197 https://edition.cnn.com/2018/07/17/football/kylian-mbappe-france-croatia-world-cup-final-spt-intl/index.html

Obama on embracing our common humanity:

“Just ask the French football team” he said. “Not all of those folks looked like Gauls to me. But they’re French!”

As you know more than anyone else, these past eighteen months have been especially excruciating for all of us, your children, immigrants, so proud and grateful to be American citizens.

Every day seems to bring us more pain and anxiety, more shocking news about these awful, unpatriotic people who chose to betray your values – the very same ideals we embrace with passion – while they keep on promoting hate and discrimination.

Which is why I thought of bringing you some good, super exciting news. Have you heard? France, your birthplace, is beyond herself, suddenly unified, filled with a new sense of pride thanks to “Les BLEUS” winning a second (well deserved) star in the international Football Hall of Fame, this past Sunday.

You see, the best part of France’s victory against Croatia in the World Cup 2018 is not just about Les BLEUS, led by the extraordinary Didier DESCHAMPS. Not just about taking (again) the cherished trophy home 20 years after France’s first winning (1998) against Brazil. Not just about some unbelievable Teamwork and “joie de vivre, de jouer toujours plus haut, toujours plus fort, tous ensemble,” never seen before in French sports.

It is, first and foremost, about the triumph of diversity. The triumph of a nation not always rooting for cultural integration. Not always keen on promoting immigration. A nation which finally realizes how beautiful, talented and lucky she is thanks to her national, hard-working Team of French football players who, on their side of the Atlantic ocean, dared to dream BIG…

So please, please, please, don’t worry, Lady Liberty! We got your back! You taught us well! The tide is turning BIG TIME! Just a matter of months (hopefully right before or after your 133th Birthday) when We, the People, get our country back on track so you can keep enlightening us and the rest of the world in the old-fashioned, Emma Lazarus’ way: “(…) Give me your tired, your poor, Your huddled masses yearning to breathe free, The wretched refuse of your teeming shore. Send these, the homeless, tempest-tost to me, I lift my lamp beside the golden door!”

P.S. Will be in touch with you again very soon to help promote the opening of your new Museum (May 2019) and re: our newest project #MDFDEFriendshipMerciTrain70. So much to tell you! Wait and see: You are going to love IT!

© The Official French-American Project entirely conceived by Ms. Elisabeth JENSSEN to celebrate the 70th Anniversary of the Friendship Train and the Merci Train (2017-2019).

We Love YOU and Thank YOU, Kylian MBAPPE, the Young Man from

Bondy, France with the Golden Feet and a Golden Heart. Go Bondy! E.J.

Kylian Mbappe: The boy from Bondy who never forgot his birthplace

The 19-year-old, who wasn’t even born when France won their first World Cup, traveled to Russia 2018 with the label of the world’s most promising teenager.

He returned with the World Cup trophy and a reputation as the heir apparent to Cristiano Ronaldo and Lionel Messi as the world’s best player.

His return to France on Monday also shone a spotlight on Bondy, just over 10 kilometers from the Stade France in Paris, where the French national team plays its home games.

Bondy is a place Mbappe has never forgotten.

He’s donating his World Cup winnings — reportedly as much as $500,000 — to Premiers de Cordée, a charity that offers sporting opportunities to children who are hospitalized or have disabilities, which is based at the Stade de France. The charity confirmed to CNN they will receive Mbappe’s winnings in September.

“Children have stars in their eyes, when they see Kylian,” says Premiers de Cordée spokeswoman Ninon Bardel, adding Mbappe has been working with them for around a year.

“Sometimes they have some difficulties to realize that he is real, it’s quite fun. But Kylian has a such ease with them that everything become normal and simple. He says himself that the stars are children.

“‘Premiers de cordée’ is a french mountain expression,” continues Bardel. “The ‘premier de cordée’ is the one in front of us who brings all the others to the top.

“We, our association, would like that the kids feel able to move, practice sport and keep up the morale to get out and realize theirs dreams. It’s a metaphor. We try to take them, thanks to sport, where they do not necessarily feel able to go.”

In the streets where Mbappe used to play football, the star — through his sponsorship with Nike — had a futsal pitch installed for the community.

READ: Kylian Mbappe — The ‘phenomenon that breathes and sleeps football’ 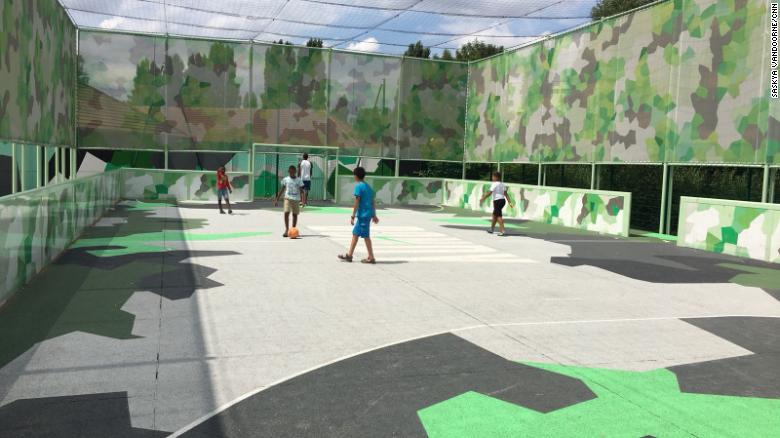 The pitch Kylian Mbappe donated to the community in Bondy.

‘This is Bondy, this is Mbappe’

The Greater Paris area, particularly its diverse, sprawling suburbs, is arguably the most fertile breeding ground in the world for top-class footballing talent.

Mbappe, Paul Pogba, N’Golo Kante, Blaise Matuidi, Anthony Martial, Kingsley Coman and Algerian Riyad Mahrez were all either born, raised or had their footballing educations in the Ile-de-France.

One such area is the commune of Bondy.

The town hall, a dreary, gray building, is adorned with a big red banner, which reads: “Thank you Kylian, all of the people of Bondy are with you!”

The reputation of the banlieues — suburbs on the outskirts of Paris — suffered in the aftermath of riots and terrorist attacks, with some being labeled “no-go zones.”

Nabil Larbi is a municipal councilor at Bondy’s town hall, but he was also neighbors with Mbappe when the pair were growing up in the commune.

He believes Mbappe’s success — and the achievement of such a diverse national team — serves as a reminder of the talent that lies within the banlieues.

“Now we have to see diversity as a positive thing. When we usually hear about the suburbs, when we hear about Bondy, we hear only negative things.

“But when you come into Bondy, you realize it’s ‘fake news’ because you are welcome, everybody is welcome. It is pleasant to live in Bondy. I have been in Bondy for 35 years and here I can say that diversity is a strength for the town.

“This is France, this is Bondy, this is Mbappe.” 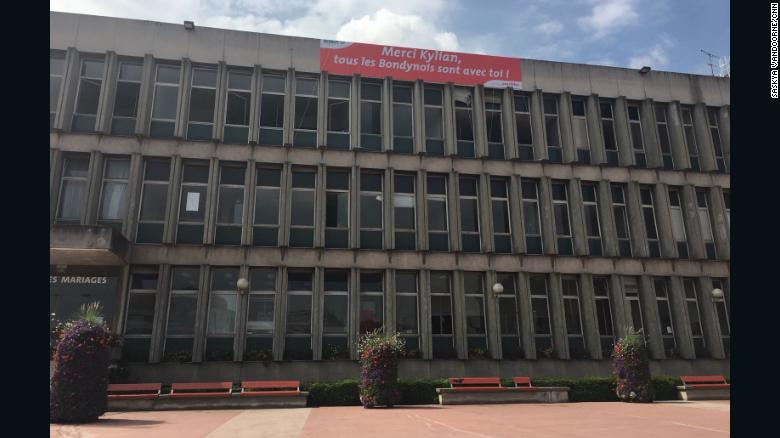 The town hall in Bondy.

Larbi says Mbappe is an “idol” and a “symbol of hope” for the young people in Bondy, who have since been reinvigorated by the teenager’s success. 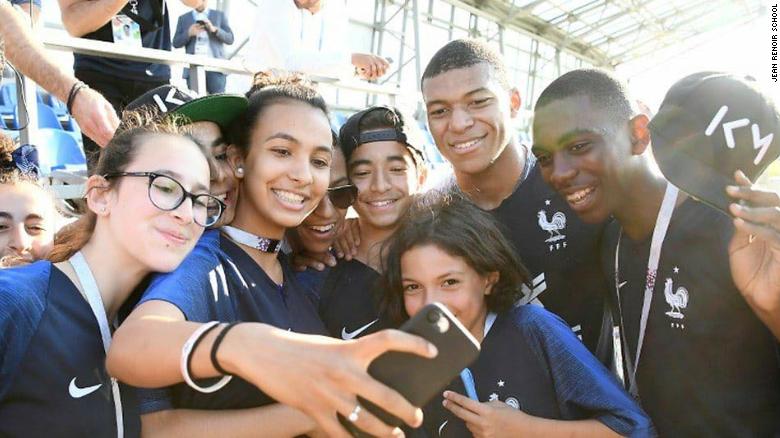 Kylian Mbappe poses for a photo with the pupils from school Jean Renoir.

At the Jean Renoir School in east Bondy, Mbappe’s generosity was felt long before he shot to superstardom in Russia.

During a visit prior to the World Cup, Mbappe told the class of 25 students that he was personally sending them to watch France vs. Denmark and Portugal vs. Morocco. 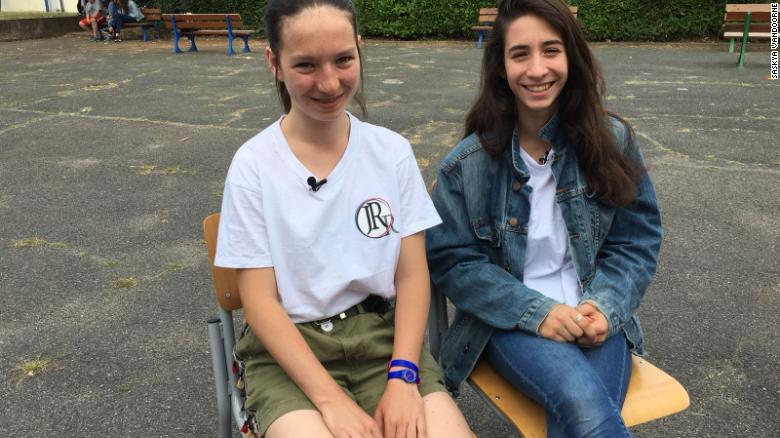 Zoe Crihan, 13 (L), and Louise Monciero, 14, were two of the pupils from school Jean Renoir that Kylian Mbappe sent to Russia

“It was a lot of emotion,” says pupil Louise Monciero, 14. “Because we were there and Kylian came towards us and to see this guy from Bondy, like us, it was a dream it meant everything is possible.

“Someone like us can become a professional player and win the World Cup,” added classmate Zoe Crihan, 13. 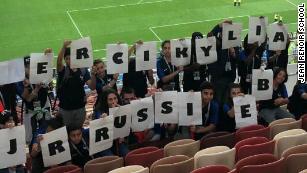 The pupils from school Jean Renoir in Russia. They went to watch France vs. Denmark and Morocco vs. Portugal.

The negative portrayal of the banlieues affected those living in the communities but Larbi believes the World Cup success can help them shake off those unfair connotations.

“I hope that the victory of France makes everybody in France remember that diversity is a strength and not the contrary,” Larbi says. “Because of Kylian Mbappe, the spotlight is on the suburbs like Bondy.

“We have 55,000 people living in Bondy and everyone knows this family and we can say that everybody is proud as if it was our family, as if Kylian was our kid.

“Kylian is our son, is Bondy’s son. We are waiting for him, we’re in a hurry to see him bring the cup to Bondy and I think we will throw a big party for him in Bondy when he comes back.”

The Mbappe family is one with sporting pedigree. Father Wilfried was a youth coach at the club for more than 20 years, before retiring earlier in 2018, and mother Fayza played handball for Bondy in the French first division. 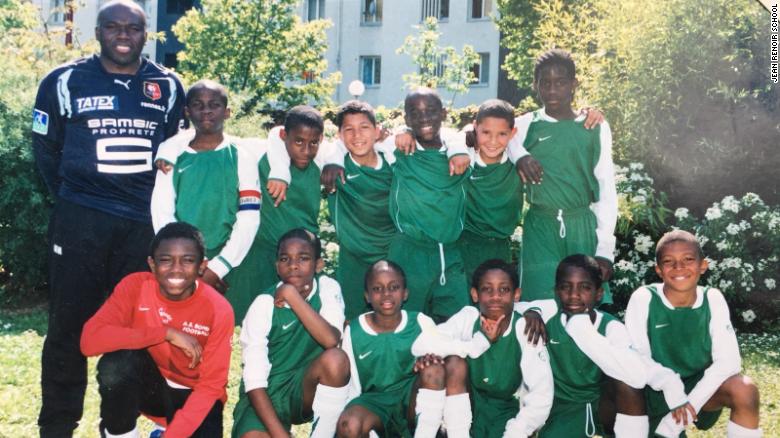 Though Mbappe’s rise has been nothing short of meteoric, it has likely come as no surprise to those within the sport and those who knew him as a child.

“When he played, we saw he had more potential than the other players. When he was younger, he played only with bigger players and not with the same aged people.”

In his early teens, Mbappe attended Clairefontaine — the French Football Federation’s official academy — and had previously been on trial at English Premier League side Chelsea, who he even played a friendly for.

Then, at 14 years old, came a visit to Real Madrid where the now-famous photo of a grinning Mbappe beside his idol Ronaldo was taken. 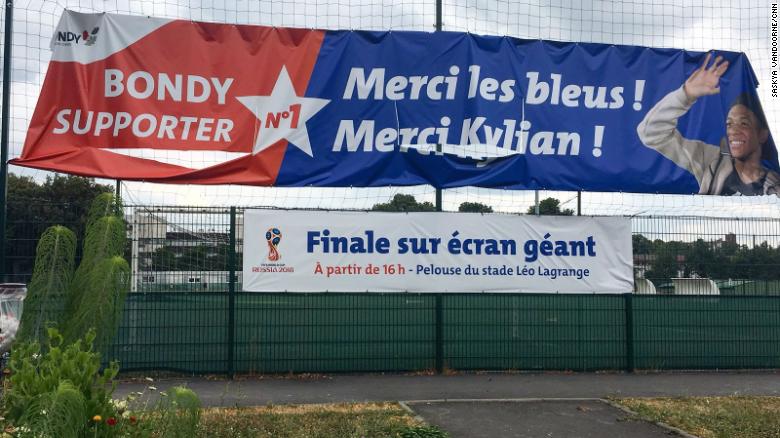 “I knew that he was a phenomenon,” AS Monaco vice president Vadim Vasilyev, the man who gave Mbappe his first professional contract, told CNN Sport ahead of the World Cup final.

“It’s not just ‘very good,’ it’s not ‘top,’ it’s a phenomenal player. He has all the ingredients. Of course it happened more quickly than anybody could have envisaged, even himself, that’s for sure.

“He breathes football, sleeps football, actually nothing else on his mind.

“But he’s doing it at this level and I’m not surprised at all. It just confirmed what we knew all along, he’s an amazing talent and this boy will become one of the best — if he isn’t already — one of the best in world.”

But, were it not for Vasilyev’s intervention, Mbappe might never have broken through into the Monaco first team.

“I said: ‘What’s the problem? Let’s sign him (from the youth team),'” he recalls. “They said it wasn’t easy and it turned out there were some complications. He was not really very happy and actually he wanted to go.

“I started seeing his parents and watching him in training and I sent him in the first team to train with our coach Leonardo Jardim. They said: ‘Wow, how come this boy is in our academy and we didn’t know about it.’

“We built a relationship of trust and then he signed his pro contract.”

Comparisons have naturally been drawn to France’s most prolific striker, Thierry Henry; the career beginning at AS Monaco and the electric pace and skill, but Vasilyev feels these are misplaced.

“He is himself and he will write his own history in football and I agree with that.”

Now here he is, still just a teenager but already writing history.

The first player born after the 1998 triumph to be picked for the national team is now the man, or kid more accurately, who led his country to only its second World Cup.

At just 19 years of age, there remains plenty of time for Mbappe to keep writing.