Statue of Liberty NM a retweeté

NYC International Affairs @globalnyc · 1 juil. Just in time for #IndependenceDay2021. Proud to welcome the newest #LadyLiberty to @EllisIslandNPS. NYC is back and we have so much to celebrate this July 4th!  #ViveLaLiberty

(CNN) One hundred and thirty-five years after the Statue of Liberty was formally unveiled in New York Harbor, her “little sister” has taken up residence in front of the French ambassador’s home in Washington, DC.

The miniature Lady Liberty was officially inaugurated in a ceremony with US Secretary of State Antony Blinken and French Foreign Minister Jean-Yves Le Drian on Wednesday, coinciding with France’s Bastille Day.

“Liberté and égalité — they translate very easily into English, but there’s no single word in English — brotherhood, sisterhood, solidarity, fraternity — that I think perfectly captures the essence of fraternité,” Blinken said in remarks at the ceremony, referencing the French national motto.

“But I think it’s fair to say that fraternité is the word that best defines the relationship between our people and our ongoing struggle to improve our democracies and advance the ideals embodied in the light that shines the world, at home and around the world,” he said. “So may she continue to remind us the principles we share and the work that remains to live up to them. And may we never be cured of yearning for freedom.”

French Ambassador Philippe Etienne said “it means a lot” to have the statue in the United States, calling it “a strong reminder … of the friendship between the French people and the American people.”

“It’s a reminder of the importance of this core value of liberty for the world,” he told CNN, noting that the formal title of the Statue of Liberty is “Liberty Enlightening the World.”

The “little sister” is an exact replica of the original but is one-sixteenth the size. It was crafted from sculptor Auguste Bartholdi’s 1878 plaster model and stood on display at the National Museum of Arts and Crafts in Paris for a decade before beginning its journey to the US. 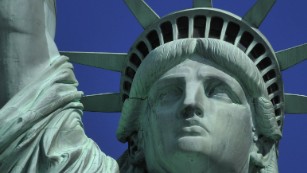 In early June, the 1,000-pound, nine-foot tall statue was uninstalled from the museum and placed “in a custom-designed plexiglass container specifically for our ‘little sister,'” according to Ed Aldridge, the President of CMA CGM North America — the company that handled the shipping and logistics for the statue.

Aldridge told CNN they “took tremendous care and very detailed, thorough planning to make sure (they) did it right.”

“We trucked her very carefully to Le Havre, France, where we put her on board one of our CMA CGM ships and then took her to New Jersey and then trucked her to Ellis Island, and then eventually we trucked her down here to the Ambassador’s residence,” he said.

The statue was displayed near its world-famous “big sister” in New York City at the beginning of July, and Aldridge told CNN that they sped their ship up to get the statue across the Atlantic in time for Independence Day.

Following the dedication on France’s national day, the statue will remain at the ambassador’s residence in the US capital for 10 years.

France is sending a second Statue of Liberty to the US

New Yorkers have a surprise gift to look forward to for this Independence Day: a second Statue of Liberty sent by France. This new bronze statue, nicknamed the “little sister,” is one-sixteenth the size of the world-famous one that stands on Liberty Island. On Monday, during a special ceremony, the smaller sibling was lifted and loaded into a special container at the National Museum of Arts and Crafts (CNAM) in central Paris, where it has been installed since 2011 in the museum’s garden. It will be erected on Ellis Island, just across the water from the original, from July 1 to July 5.

“The statue symbolizes freedom and the light around all the world,” said Olivier Faron, general administrator of the CNAM. “We want to send a very simple message: Our friendship with the United States is very important, particularly at this moment. We have to conserve and defend our friendship.”

What should our monuments of the future look like?

The replica bears the same neoclassic design as its “big sister” in New York, who represents the Roman goddess Libertas and measures 151 feet tall atop the giant pedestal. She is imbued with symbolism: the crown with seven spikes, representing sun rays extending out to the world; a tablet inscribed with America’s date of independence in Roman numerals; and broken chains and shackles lying at its left foot, signifying the abolition of slavery in the United States.

The date of the ceremony was symbolic as well, held just after the 77th anniversary of D-Day during World War II, when American and other Allied soldiers landed on French soil in 1944, marking the beginning of the liberation of Western Europe from Nazi occupation.

The iconic Statue of Liberty that arrived in New York in 1886 was also meant to strengthen the Franco-American friendship, at a time when Paris and Washington were slowly drifting apart, as French historian André Kaspi reminded in a speech during the ceremony.

After Independance Day, it will be installed outside the French Ambassador’s residence in Washington, D.C. on Bastille Day — July 14. Credit: CMA CGM Group

The Statue of Liberty was first proposed in 1865 by French historian Édouard de Laboulaye as a gift to the newly reunified United States following the Civil War. Laboulaye wanted to link the emancipation of slaves with the values of the French Enlightenment. France was undergoing its own shifts at the time, as the repressive Napoleon III ruled until 1870 and was then deposed during the Franco-Prussian War.

In 1871, under the new Third Republic, Frédéric-Auguste Bartholdi, the chosen sculptor, traveled across the Atlantic to sell the project to the American government and to scout for potential locations. US President and former Union General Ulysses S. Grant initially met his proposal with indifference, according to Kaspi.

The Statue of Liberty: A beacon of freedom

Even though Bartholdi eyed the formerly named Bedloe’s Island in New York Harbor as the ideal location for the future statue — all inbound ships to New York passed by it at the time — it wasn’t until 1875 that Bartholdi made a formal request to Grant to use it as the official site. To pay for the statue, the two countries struck a deal: the French funded the statue, while the Americans funded the pedestal.

The value of freedom is central to the new Lady Liberty statue. Credit: CMA CGM Group

Bartholdi’s sculpture of copper plates over an iron frame took nearly a decade to complete. The structure was conceptualized by engineer Eugène-Emmanuel Viollet-le-Duc, but when he died in 1879, just four years into its creation, Alexandre-Gustave Eiffel, the French engineer best known for constructing the Eiffel Tower, finished the task. The 225-ton statue departed disassembled for New York in 1885, onboard a steamer, and was inaugurated in New York the following year by a new president, Grover Cleveland, who hailed Bartholdi as “the greatest man in America today.”

Over a century later, Faron and the CNAM put forward the best of French craftsmanship through a local workshop to make sure the modern replica keeps this great heritage. A team of five at the art foundry Susse Fondeur in Malakoff spent four months to finish the statue. “It’s made with all the conditions to respect the original model of Bartholdi,” Faron said.

The journey for the “little sister” has just begun: Following the footsteps of the original statue, it will board a ship at the port city of Le Havre on June 19 and reach New York on July 1. Its final destination will be Washington, DC, where it will be on display for 10 years at the French ambassador’s residence.

MDFDE/USA: 9/11 20TH Anniversary: Honoring the Memory of the 2,977 Innocent Victims of Terrorism #MDFDEJeSuisLadyLiberty135