Queen Elizabeth II visited the installation with the Duke of Edinburgh on October 16, 2014. 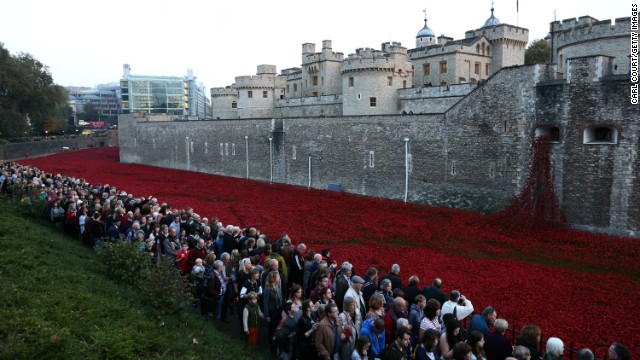 More than four million people — 60,000 to 70,000 a day — are expected to visit the Blood Swept Lands and Seas of Red installation at the Tower of London. 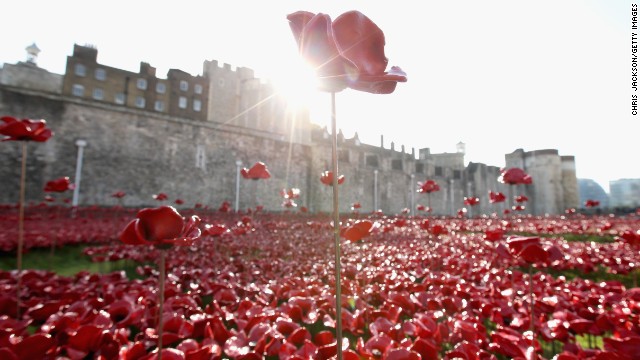 The evolving artwork, by ceramic artist Paul Cummins and theater designer Tom Piper, is made up of 888,246 ceramic poppies. 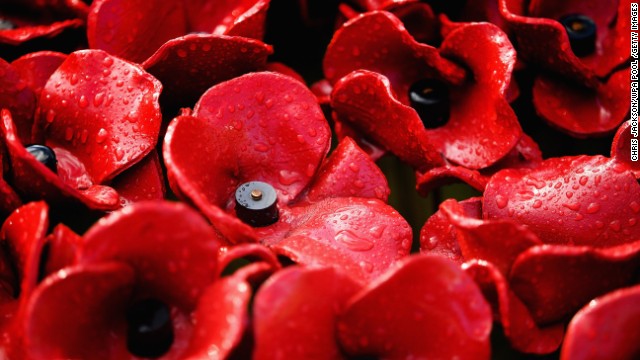 Each of the blooms commemorates one of the British and Colonial soldiers who died in World War I. 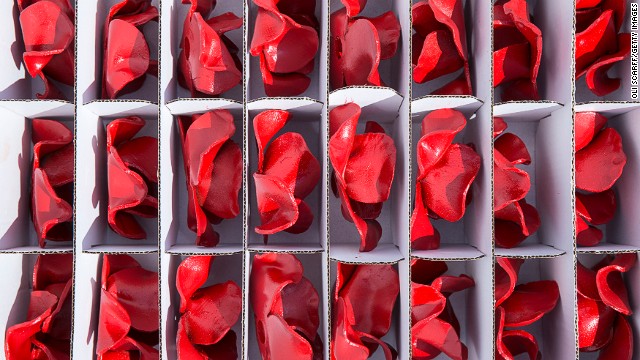 The poppies are unique — each one is individually handcrafted by a team of artists and volunteers. 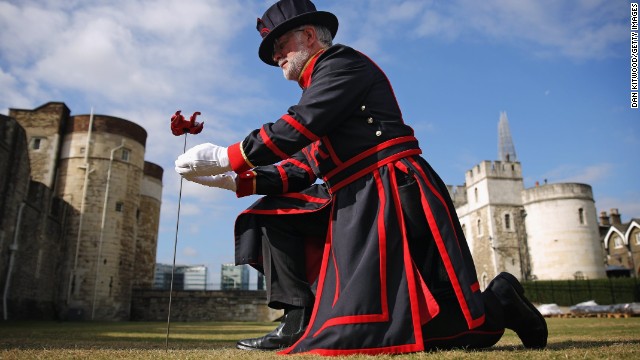 The first was “planted” in the moat of the Tower of London by Crawford Butler, the longest serving Yeoman Warder at the Tower, on July 17, 2014. 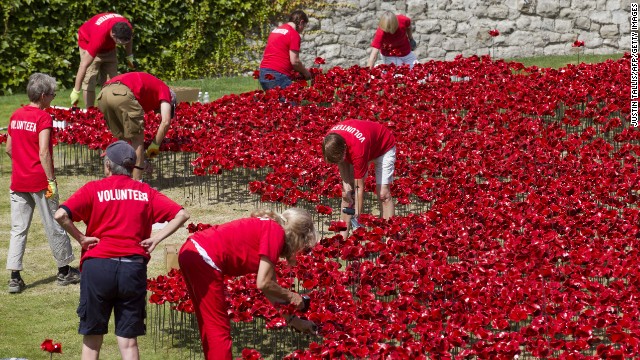 Since then, an army of more than 16,000 volunteers has worked to install hundreds of thousands more, gradually “flooding” the dry moat with a blood red tide. 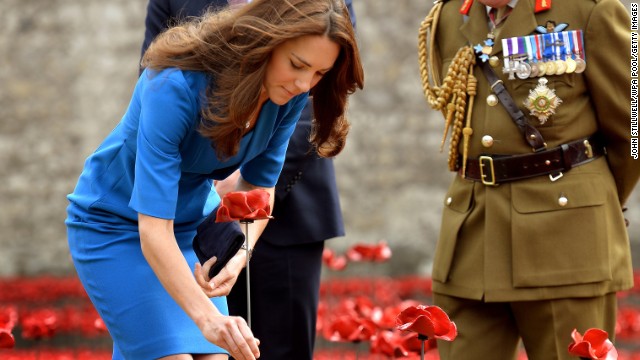 And Catherine, Duchess of Cambridge planted a poppy when she visited with Prince William, Duke of Cambridge in the summer. 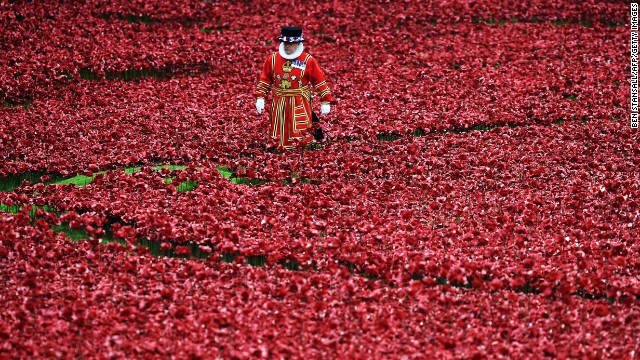 The display is due to end on November 11 — Armistice Day — when the final poppy is planted shortly before 11am. 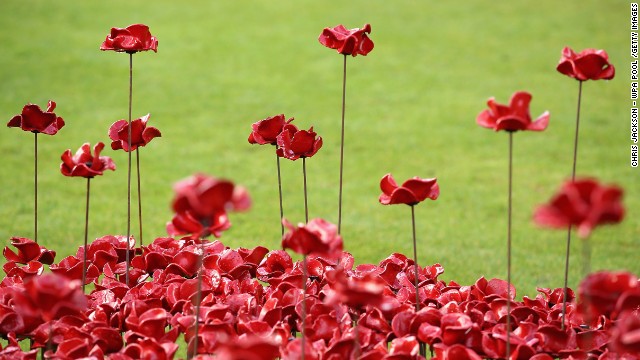 To mark the final addition, a lone bugler will play the Last Post, and two minutes’ silence will be observed. 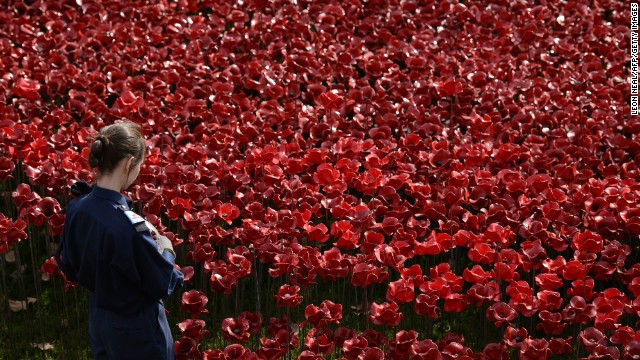 The following day, more volunteers will arrive to start “picking” the flowers, which will then be checked, cleaned and shipped off to their new owners. 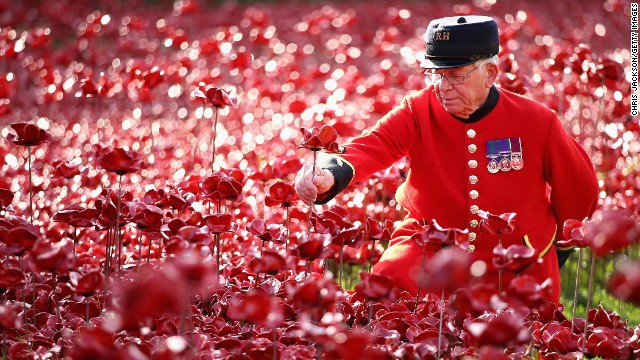 Each of the flowers has been sold — for £25 (about $40) — to benefit charities working with armed services personnel and veterans. 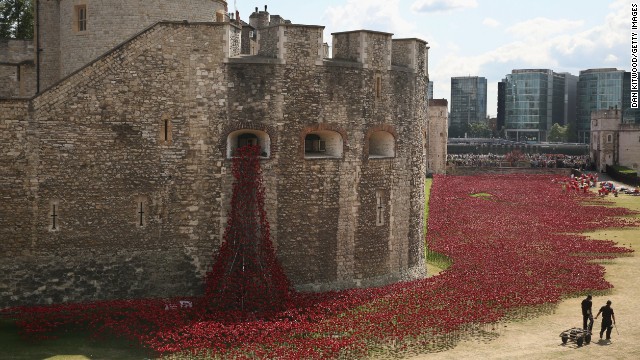 British Prime Minister David Cameron this week praised all of those involved in the “extraordinary project” at the Tower of London. 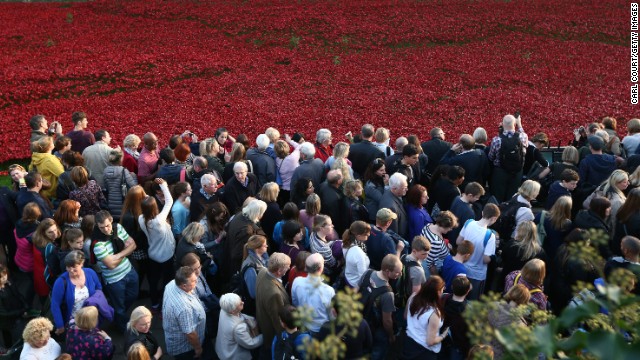 Visitor numbers on the final weekend of the exhibition are expected to be huge, and the Mayor of London has called for the poppies to be kept in place for longer.

London (CNN) — Wrapped in heavy coats against the November chill, thousands of visitors crowd onto the paths circling the Tower of London to catch a glimpse of the extraordinary “sea” of crimson filling the castle’s moat below.

The blood-red tide which flows from one of the palace’s windows and laps at its ancient stone walls is made of hundreds of thousands of individually handcrafted ceramic poppies.

Each of the 888,246 blooms in the artwork, “Blood Swept Lands and Seas of Red,” represents a life lost in World War I — one for each of the British and Colonial soldiers killed in the conflict that began 100 years ago.

And as Britain commemorates Armistice Day in the war’s centenary year, the final poppy will be “planted” shortly before 11am on November 11, the time at which the armistice was signed, ending the war in 1918.

Once the evolving artwork, which began with the planting of the first poppy by Tower of London Yeoman Warder Crawford Butler on July 17, is “complete” a lone bugler will play the Last Post, signaling the start of two minutes’ silence in memory of the war dead. 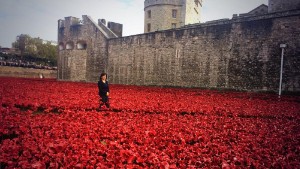 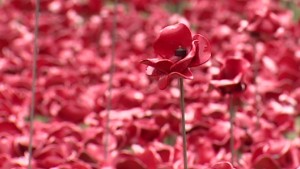 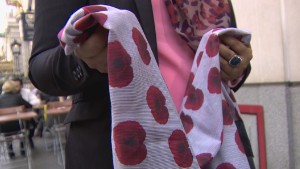 Less than 24 hours later, the army of thousands of volunteers who helped put it together will sweep in and begin dismantling it, “picking” each flower.

The poppies will then be checked, cleaned and packed before being shipped to their new owners — each has been sold, for £25 (about $40), to benefit six armed forces charities.

But following widespread calls for the hugely popular installation to remain in place longer, even until 2018, leaving them at the Tower for the duration of the WWI anniversary, organizers said two parts of the display would be kept in place until the end of November.

The “weeping window” and the “wave” of poppies across the path leading into the Tower will then be taken on a tour of the UK, before becoming part of the permanent exhibitions at the Imperial War Museums in London and Manchester.

Historic Royal Palaces (HRP), the organization which runs the Tower of London, tweeted: “We’re pleased to confirm that these two major features of the #TowerPoppies will be going on national tour until 2018.”

In a statement, British Prime Minister David Cameron said: “The poppy display at the Tower of London has in a very short space of time become a much loved and respected monument.

“We want to ensure that as many people as possible have the opportunity to witness it … By displaying parts of the installation around the country and then permanently in the Imperial War Museum, we have ensured that this poignant memorial will be saved for the nation.”

The HRP spokeswoman told CNN that the display’s creators, ceramic artist Paul Cummins and theater designer Tom Piper, had always intended it to be an evolving memorial. “That was very much part of the artists’ intentions, the transient nature of it, as is the idea that it will then be dispersed, that the poppies will find new homes,” she said. 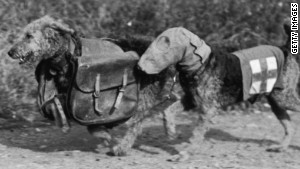 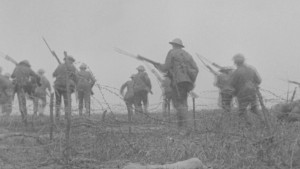 Preserving the memories of WWI 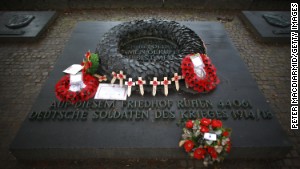 Prince William: ‘We will remember them’

HRP and Transport for London have warned those heading to the Tower to see the poppies in their last days and weeks that there are likely to be large crowds in the area, and that public transport and Tube stations nearby will be far busier than usual.

In order to allow more people to experience it, the artwork has been illuminated until midnight each evening.

There are reports that some of those who have bought the blooms are trying to cash in on the enormous popularity of the installation by selling their flowers on internet auction site eBay for more than double their original price. An eBay spokesman told Britain’s Daily Mail newspaper that such inappropriate listings would be canceled.

Cameron praised all of those involved in the “extraordinary project,” which he said had “brought forward from the British public a huge amount of reverence for those who have given their lives and served our country.”

“The numbers going to see this display have been truly extraordinary,” he said at the weekly Prime Minister’s Questions session in parliament, adding that money raised from the sale of the poppies was likely to fund valuable work by veterans’ charities.

Poppies have been used as a way of commemorating World War I for decades — in Britain, thousands of paper flowers are sold for charity each year to be worn in people’s lapels.

The flowers grew over the battlefields of northern France and Belgium, inspiring one of the most famous poems written about the conflict, by John McCrae: “In Flanders fields the poppies blow, Between the crosses, row on row …”