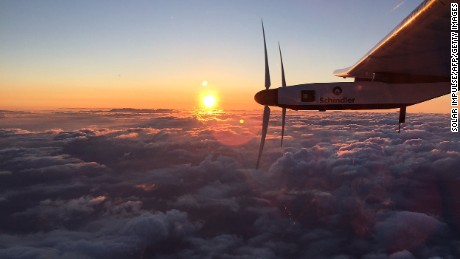 (CNN) After nearly 118 grueling, consecutive hours over the Pacific Ocean, the sun-powered Solar Impulse 2 is back on land — and freshly stamped into aviation record books.

Pilot Andre Borschberg landed the plane on the Hawaiian island of Oahu on Friday morning, five days after he took off from Japan — ending the longest and most dangerous leg in his team’s attempt to fly around the world without a drop of fuel.

The leg — the eighth of a planned 13 — set a record for the world’s longest nonstop solo flight in terms of time. It also was the longest flight in time and distance (more than 8,200 kilometers, or 5,100 miles) for a plane run only on solar power, organizers said.

After landing at Oahu’s Kalaeloa Airport, Borschberg opened the cockpit door and waved to a cheering crowd. 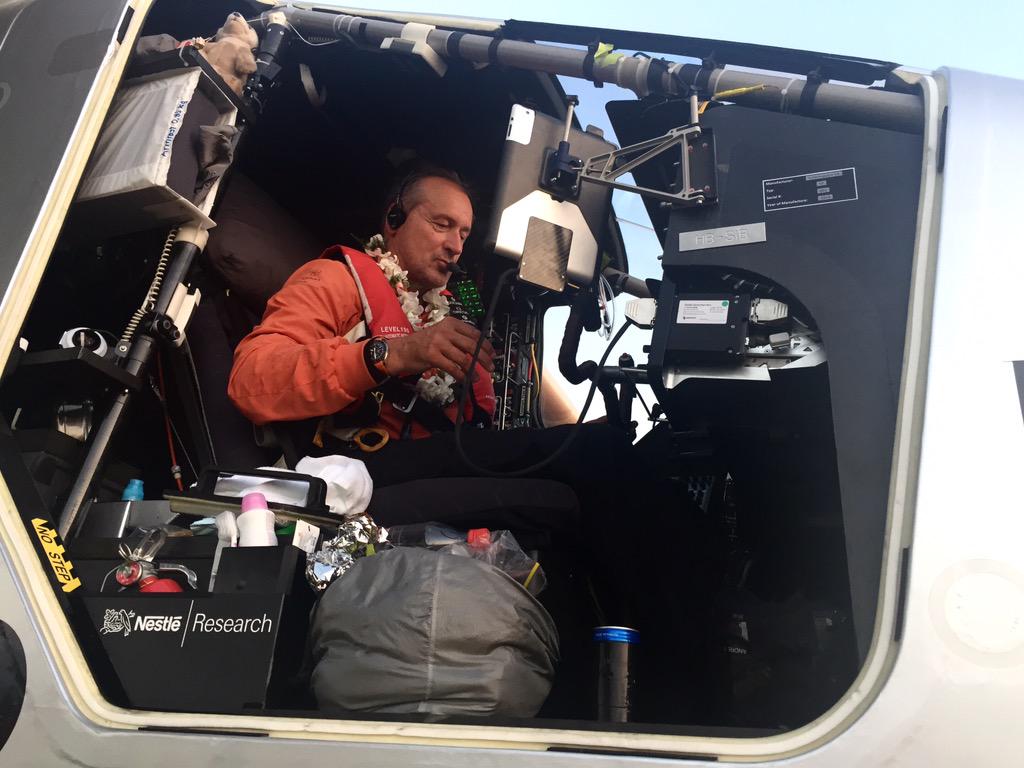 Just landed in #Hawaii with @solarimpulse! For @bertrandpiccard and I, it’s a dream coming true

Borschberg, having been off his feet for five straight days, didn’t attempt to stand until another 50 minutes passed. Someone climbed up to the cabin to give him a leg massage before he finally stepped onto a platform.

“So much joy. So much incredible feeling,” the Swiss pilot said moments later.

After weeks of weather delays, Borschberg set off Sunday from Japan on a journey across the Pacific.

The aircraft was in a holding pattern near Hawaii for much of the morning, waiting for optimal landing conditions. The Solar Impulse team’s Twitter feed described seeing the plane’s landing lights in the skies above Hawaii as a “very emotional moment.” 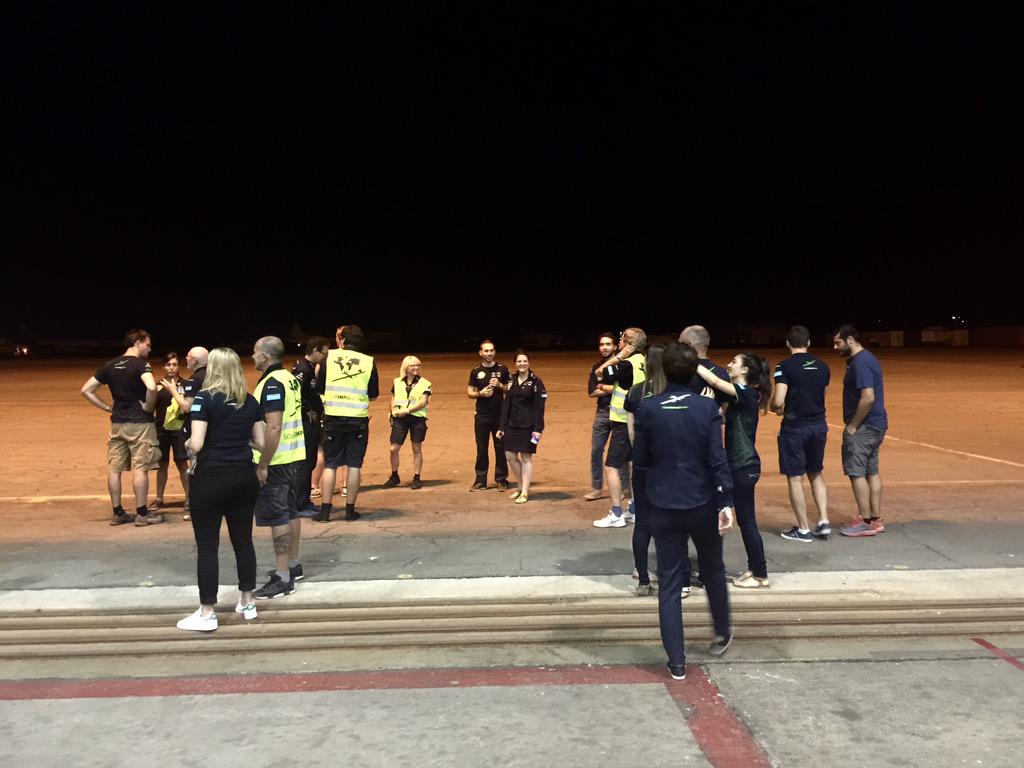 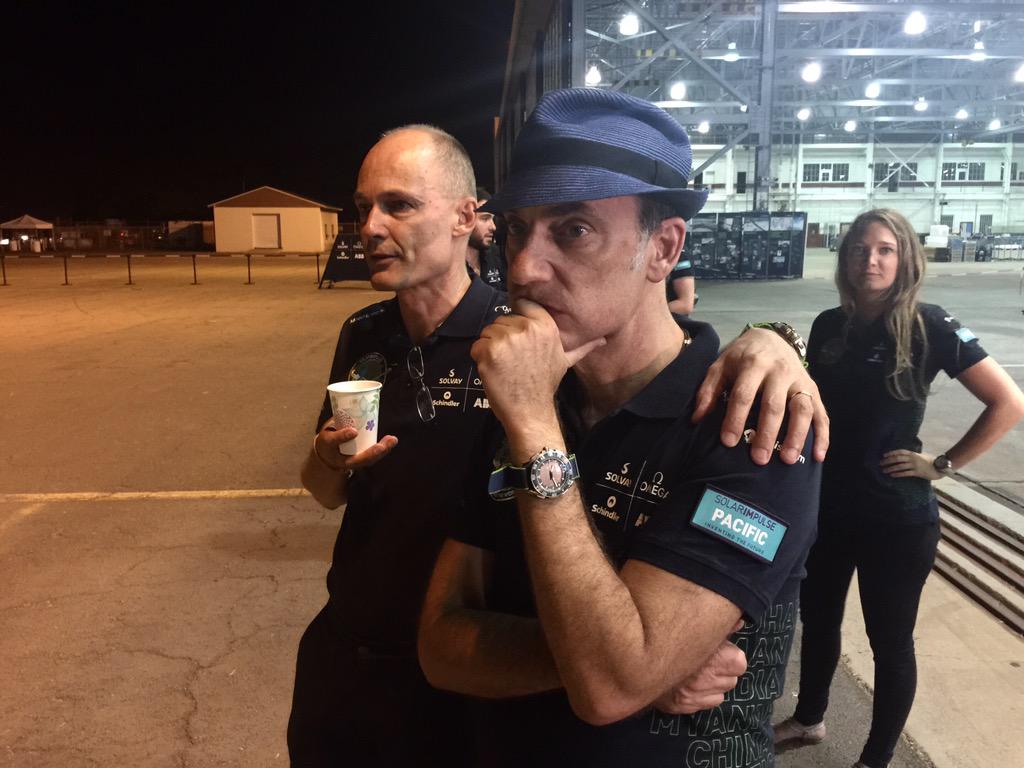 First glimpse of #Si2 in the #Hawaii sky: a very emotional moment for @bertrandpiccard and the #solarTEAM!

Borschberg’s family and co-pilot Bertrand Piccard — who alternates the flight legs with Borschberg in the team’s attempt to fly around the globe — met him in Hawaii.

The Solar Impulse’s journey began in Abu Dhabi, United Arab Emirates, in March. The team, wanting to maximize the amount of daylight it can get, says that its window to finish the voyage this year could be open through August or early September.

If weather conditions and delays push the team beyond that, the journey would resume next year. 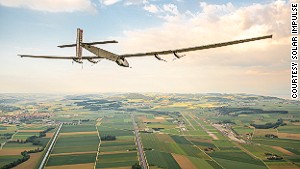 The Solar Impulse 2 is seen at the Kalaeloa Airport in Kapolei, Hawaii, on Friday, July 3. The solar-powered plane, alternately piloted by Andre Borschberg and Bertrand Piccard, is attempting to fly around the world without fuel.

Daylight maximization is key because the top of the plane’s wings and fuselage are covered with more than 17,000 solar cells. Gathering the sun’s rays during the day allows the Solar Impulse to fly continuously through the night on battery power, typically at a speed no faster than a car.

If they succeed, Borschberg and Piccard will be the first aviators in history to fly a plane around the world powered only by solar energy.

Piccard is scheduled to fly the next leg to Phoenix. Eventually, the plane will attempt to cross the Atlantic Ocean and return to Abu Dhabi, completing its 35,000-kilometer journey, which is meant to showcase the power of clean technology.

How Borschberg ate, exercised and rested

Organizers packed Solar Impulse with enough food, water and sports drinks to meet Borschberg’s nutritional needs for a week, in case weather problems meant it had to stay in the air longer than expected.

The aircraft was equipped with oxygen bottles, a parachute and a life raft in case Borschberg had to ditch midflight.

The pilot took medication to help prevent thrombosis, his team said during a live webcast of the Hawaii landing. Also helping: Stretching exercises that “increase blood circulation in vital organs and keep the pilot alert and concentrated on flying the airplane,” the team’s website says.

As for sleep? Borschberg, , while over the ocean, was allowed to take “short naps lasting up to 20 minutes, 10-12 times a day,” the website says.

Posting on his own Twitter feed, Borschberg reflected on the challenges of the latest solo leg.

“During the fourth day I felt very tired, having climbed the equivalent altitude of Mount Everest four times,” he said, adding that it was hard to keep his energy in balance with that of the plane. 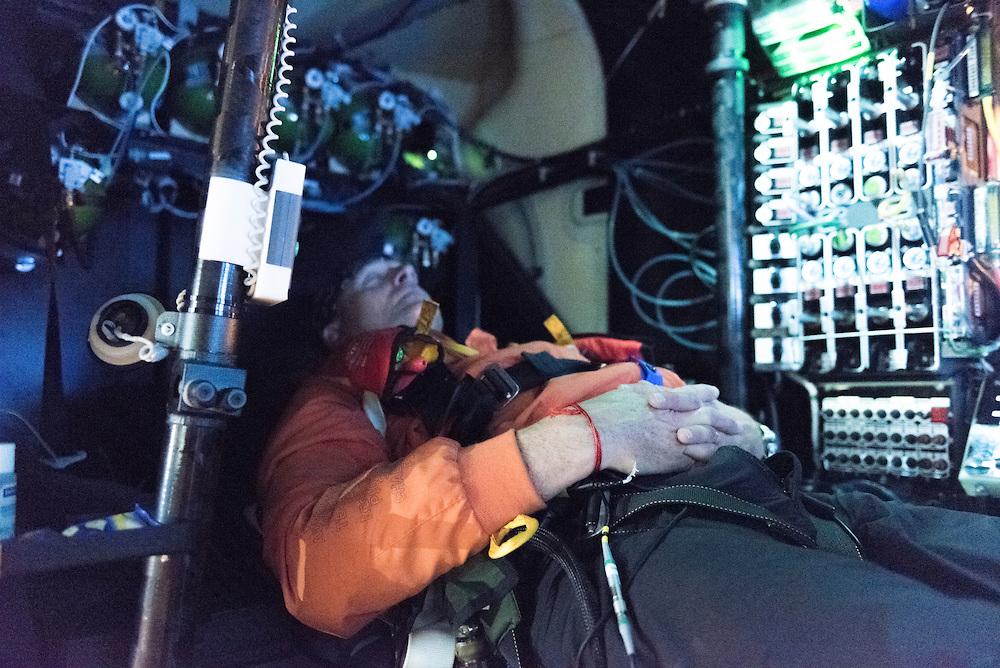 CNN’s Thom Patterson and David Molko contributed to this report.