President Barack Obama with President François Hollande in the Oval Office on 11/24/15.

the United States of America!

Obama: We are all French now

Washington (CNN) It might be America’s oldest alliance, but it has rarely looked more vibrant.

French President François Hollande and U.S. President Barack Obama on Tuesday vowed to intensify their nations’ military attacks on ISIS in Syria and Iraq at a White House meeting lent urgency and deep symbolic significance by the terrorist attacks on Paris 10 days ago that opened a new phase of the war on terror.

Even before the attacks, France, as the only European nation joining the United States in striking ISIS in Syria, and after several anti-terror operations in Africa in which the two nations cooperated, had emerged as the closest U.S. transatlantic military ally.

And the solidarity on show between Obama and Hollande during an hour-long press conference in the East Room of the White House made clear that the U.S.-France diplomatic relationship is tighter than ever — even if Obama doesn’t plan to greatly change his strategy or work with Russia to battle the terror group, as France has called for, unless Russia confine its attacks to ISIS.

Despite some divergence in the two leaders’ ideas for how best to battle ISIS, Tuesday’s press conference seemed to be a deliberate show of unity and exchange of rhetorical support between the presidents at a time of international disruption and global terror.

READ: Obama: Turkey has the right to defend itself and its airspace

Obama spoke in unusually personal and emotive terms directly to the French people about his own memories of spending time in France as he argued that the ISIS shootings and bombings on cafes, a soccer stadium and a concert hall in Paris were by extension an attack on the world itself.

“We love France for your spirit and your culture and your joie de vivre. Since the attacks, Americans have recalled their own visits to Paris, visiting the Eiffel Tower or walking along the Seine. We know these places. They’re part of our memories, woven into the fabric of our lives and our culture,” Obama said.

The President said that upstairs in the White House residence, he had a photo of first lady Michelle Obama and himself kissing in the French capital’s Luxembourg Gardens.

‘Our hearts broke, too’

“When tragedy struck that evening, our hearts broke, too,” he said of the attacks earlier this month. “In that stadium and the concert hall, in those restaurants and cafes, we see our own. In the face of the French people, we see ourselves.

“Nous sommes tous Francais,” meaning we are all French, Obama said, recalling the French newspaper headline in the days after the September 11 attacks in 2001, “Nous sommes tous Americains.”

Hollande’s visit was part of an extraordinary diplomatic initiative that will see him meet the leaders of the United States, Britain, Russia, Germany and China this week as he seeks to bolster an international coalition against ISIS and to focus it squarely on attacking the extremist group.

Obama’s embrace of Hollande represented an important endorsement from an American president who remains popular in France, despite indications the two leaders have different interpretations of the likelihood of Russia agreeing to align its military operations in Syria — which have been mainly aimed at bolstering President Bashar al-Assad — more closely with Western nations.

The talks, in which Obama and Hollande agreed to intensify airstrikes and to broaden the target list, was also a sign of how things have shifted in the U.S.-France relationship.

A dozen years ago, it was a French president — Jacques Chirac — who was calling for restraint as George W. Bush was bristling for war with Saddam Hussein in Iraq following the September 11 attacks. And it was a French foreign minister who warned that Washington might win the war but lose the peace if it fractured Iraq.

Now, Hollande is the one who’s beating the drums of war, calling for a robust international coalition in the Middle East and declaring that France is in a state of emergency.

Obama, by contrast, is the one warning against a major new ground operation in Syria that he fears could degenerate into another years-long entanglement for America in the Middle East.

France is no longer a punchline in American politics, and after the attacks, even conservatives who have long viewed the French with suspicion over their opposition to the Iraq War, have been hailing France as a courageous partner in the war on terror.

Hollande, however, stressed on Tuesday that France would not insert ground troops into Syria, so it seemed clear he had accepted the U.S. president’s position on further ground incursions.

The changing dynamic between the two old allies reflects the impact of 14 long years of war that has left America weary of foreign intervention, as well as the insistence by Obama that a rush to war after terror attacks often goes awry.

And it’s a sign of the acute political pressures for immediate retribution faced by leaders — like Hollande — of nations that come under terrorist attacks and the consequential choices on national security they face at times of maximum national stress.

The U.S. and French leaders might have a similar goal, but their separate political perspectives lead them to view the struggle against ISIS differently.

“This time it was France that was attacked,” said Nicholas Dungan, a senior fellow at the Atlantic Council who teaches at France’s top social science university, Sciences Po, arguing that France’s lack of exposure to the Iraq War left it less gun-shy than some of its allies when contemplating military action.

Influential conservative commentators see the dynamic between Hollande and Obama as one of a resolute French leader and an American who prefers to lead from behind.

For instance, Charles Krauthammer wrote in The Washington Post that Hollande had responded to the Paris attacks with an intensified air campaign, raids on suspected domestic terrorists and changes to his country’s constitution to make “France less hospitable to jihad.”

READ: After a French tragedy, an ugly fight in America

“Meanwhile, Barack Obama, titular head of the free world, has responded to Paris with weariness and annoyance,” Krauthammer wrote.

Obama has certainly been more tempered than Hollande in his response to the Paris attacks.

“We are in a war against jihadist terrorism, which threatens the entire world,” Hollande declared in a rare speech to the French parliament last week.

In contrast Obama, in a much-criticized press conference in Turkey last Monday, described the Paris attacks as “heinous” and “sickening” but argued that the U.S. strategy against ISIS was working.

Then on Sunday, in Malaysia, Obama warned about the danger of making swift decisions in the immediate aftermath of shocking attacks like September 11.

“I think we made some bad decisions subsequent to that attack in part based on fear, and that’s why we have to be cautious about it,” Obama said, appealing for perspective and for the world not to play into ISIS’s hands by over-inflating the nature of its threat.

Their divergent tones reflect different popular standing as well. Obama has been heavily attacked for his response, with 66{4d24daa5a359aa22e51c71c531e935ff229d31c7c5eb0da4885e362fa152ead6} of Americans thinking he does not have a clear plan for defeating ISIS, according to a CBS News poll published Monday.

In fact, the ISIS strikes on Paris reshaped the Hollande presidency in a similar way to how the al Qaeda strikes on New York and Washington awoke a slumbering administration in 2001 and made Bush into an activist commander-in-chief overnight.

They may also have opened an opportunity for France to use its unique role to unify and deepen the coalition against ISIS, which currently suffers from a paucity of common purpose and lack of a central command structure. 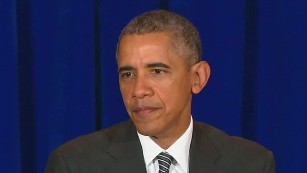 Until now, the White House has ruled out any military cooperation with Russia, aside from operational communication to avoid midair conflicts over Syria as the two nations complete separate air campaigns there.

But Obama and Hollande both forcibly called in President Vladimir Putin to make a strategic recalculation and to halt attacks on moderate rebels in Syria opposed to Assad that Washington hopes will be part of an eventual political solution in the devastated country.

Despite criticism of Obama’s strategy for underestimating ISIS — he once called it a “JV” team — it is still Washington that is calling the shots for the existing coalition, a coalition the U.S. put in place.

“The U.S. has been conducting 80{4d24daa5a359aa22e51c71c531e935ff229d31c7c5eb0da4885e362fa152ead6} or so of the airstrikes in Iraq and Syria and France has very importantly been the only European country to engage in airstrikes in Syria with us,” said Derek Chollet of the German Marshall Fund of the United States.

“The U.S. has already provided Hollande with the targeting for the airstrikes last week in Raqqa,” noted Chollet, a former senior Pentagon official in the Obama administration.

On Tuesday, Obama said that cooperation and support would continue.