Parched California Tries to Grab Storm Water before It Escapes

A behind-the-scenes battle to divert L.A.’s storm water from going to waste 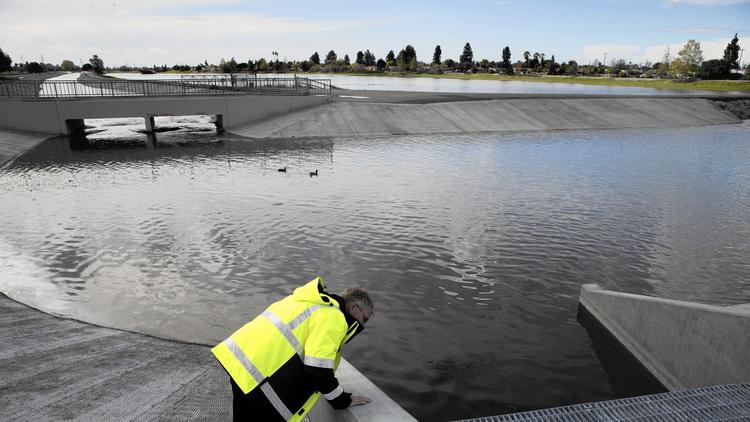 Steven Frasher, public information officer for the L.A. County Department of Public Works, watches as water from the San Gabriel River flows into a spreading ground in Pico Rivera — 90 acres of porous soil that can suck up 75 cubic feet of water every second to be stored in the aquifer below. (Patrick T. Fallon / For The Times)

The storm had gathered power for days as it crossed the Northern Pacific, and now its outer band was uppercutting the coast.

By the time Eric Batman arrived at work at 7 Monday morning, a hard west wind was driving rain and hail sideways against windows. Thunder reverberated across the L.A. Basin.

His job, as senior civil engineer for the county Department of Public Works, is to keep as much rain as possible from escaping to the ocean.

He wished this storm would slow down a bit. Let the mountains wring more of that water out. Make it more of a challenge.

Even at its current clip, the clouds would drop hundreds of millions of gallons on Southern California, and he needed to make sure the system was ready. 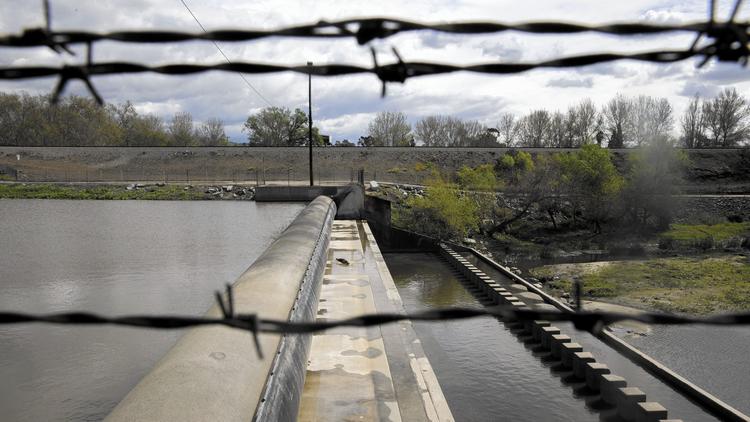 An inflatable dam diverts water from the San Gabriel River to a spreading ground in Pico Rivera. (Patrick T. Fallon / For The Times)

On the second floor of the department’s headquarters in Alhambra, he checked in with the “storm boss,” the on-duty engineer in charge of monitoring flow rates throughout the 3,300-mile network of storm drains, channels, debris basins, dams, spreading grounds — everything humans have built over the last century to control the water racing from the high San Gabriels to the sea.

“Where are we open?” Batman asked. “How much are we taking in?”

The storm boss told Batman that he had inflated one of the seven rubber dams along the lower San Gabriel River. This move would divert the flow into a spreading ground in Pico Rivera — 90 acres of porous soil that can suck up 75 cubic feet of water every second to be stored in the aquifer below.

But the water wasn’t there yet. The San Gabriel takes its time.

With age, the county’s two big rivers — sisters born of the same weather systems and topography — have grown distinct in appearance and temperament.

The L.A. River is a fast and moody Type A, and it’s had a lot of work done.

The San Gabriel is more natural and leisurely paced.

Both rivers and their tributaries cascade from above 7,000 feet to the Pacific Ocean in less than 60 miles and are historically prone to major flooding during wet years.

After floods in 1938 killed 87 people, the Army Corps of Engineers and the L.A. County Flood Control District rapidly sped up the push to build dams and channelize the rivers. Because development had already hemmed in the L.A. River, it had to be encased in concrete to keep it in line, and it became rainwater’s 51-mile drag strip to Long Beach.

The concrete made the river safer, but for many — especially during the rare storms that grace a long drought — the sight of the Los Angeles River at full throttle became a disheartening ritual of squandered opportunity.

The 58-mile San Gabriel River, on the other hand, had more open space around it, giving water engineers more room to divert its flow to adjacent spreading grounds. Only the last 10 miles of its bottom is paved. For most of its run to the Pacific, it flows over rock and sand.

So by 9:30 a.m. Monday, while the L.A. River’s water was already roaring to the sea at more than 7,200 cubic feet every second, the San Gabriel’s was meandering down the riverbed and into spreading grounds far upstream, percolating as nature intended.

The aquifers of Los Angeles County, fed by the rain and mountain runoff for eons, were once legendary. The water table was so brimming that water gushed out of springs and from wells without needing to be pumped. In 1904, some 1,700 of these artesian wells dotted the L.A. Basin.

But as the population rapidly expanded, residents began drawing more groundwater than was going in, and streets, highways, factories, parking lots and homes made more and more of the county impervious to infiltration.

In the 1930s, the County Flood Control District began acquiring land adjacent to the rivers and creeks to use as spreading grounds.

The region’s fractured geology made that tricky. The porous alluvial soils and rock that have flowed out of the steep, highly erosive mountains for the last 5 million years or so have made the valleys good areas to recharge the aquifer.

But the marine sediment of the coastal areas had a hard top layer of clay, which — as any gardener can attest — drains poorly.

“The farther you get from the mountains, the finer material you get,” Batman said. “The bigger stuff drops away.”

So there was limited opportunity to catch the urban runoff in the lower San Fernando Valley and the L.A. Basin.

One exception: the Montebello Forebay, an area where the coarse alluvial sediment extended into the basin along the San Gabriel and Rio Hondo.

Today, drivers heading south out of Commerce on the I-5 may wonder what that dusty meadow is doing amid so much industry. Answer: It’s some of the 700 acres of forebay that the county acquired in the late 1930s as spreading grounds.

Most of the other 25 spreading grounds are far upstream, near the mountains. Partly because of this, an estimated 163 billion gallons of water a year — including much that falls from the sky over the flatlands — slips to the sea, enough to fill a large swimming pool for every household in the county.

Only 65 billion gallons is captured and stored in the aquifers.

A years-long study by the county and the Bureau of Reclamation, published in January, looked at ways to ramp up that number. Most of the opportunities lie in keeping the rainwater out of the flood control system and trapping it where it lands.

One project they point to is a park in Sun Valley. In 2006, engineers installed two infiltration basins — vertical layers of concrete and gravel — under the soccer and baseball fields. A storm drain along Cantara Street now empties underground into the basin, and the water seeps into the aquifer below. County officials estimate it captures about 10 million gallons a year.

Depending on what new measures are taken, officials say they might trap as many as 50 billion more gallons across the county.

“These types of projects are critical for our communities to become climate-resilient,” said Deborah Bloome, senior director of policy for TreePeople, a group that advocates for planting trees and harvesting more rain, in part to water them.

The TreePeople campus in Coldwater Canyon has a parking lot that is graded so the rain flows into a cistern that holds 216,000 gallons. “With the impacts of climate change already being felt, the snowpack being diminished, we need to be capturing more of our water locally,” Bloome said.

At 11 a.m., on the south side of Whittier Boulevard in Pico Rivera, across from A Mi Hacienda Restaurant and Nightclub and the Steak ‘N Stein Inn, the early morning rains off the Pacific are finally seeping into the earth.

The thick rubber dam has diverted the river into the San Gabriel Coastal Spreading Grounds.

This open space was first used to trap water after the deadly floods of 1938.

By that year, the water table had dropped in places from about 10 feet to 20 feet below ground level at the turn of the century to more than 80 feet below the ground. The geysers of water were long gone.

Officials estimate that around 1960, the aquifers in the Los Angeles Basin reached a low point of about 250 feet deep, or 100 feet below sea level. This allowed seawater to start encroaching.

Since then, Public Works and the Water Replenishment District have been diverting treated wastewater and imported water into the spreading grounds, using its storm channels as plumbing. The water table has risen 80 feet.

Just days before Monday’s storm, Batman sent a delivery of Northern California water down the pipes to the spreading grounds in Pico Rivera.

That was a rare event. Winters are usually reserved for water from the sky.

On Monday, after the storm had passed, billowing white clouds still touched the mountains and the engineers were still watching their system capture water.

First it sluiced through a de-silting basin, a maze of earthen channels that slow the current and allow silt to settle on the bottom.

Then the water flowed into the next two basins, now with less silt to clog the percolation process.

With no water getting past that rubber dam, this is where the river effectively ended that day, as if in some endorheic lake in the desert.

Downstream, the San Gabriel river was a green meadow with scattered willows and ponds.

If the storm had been bigger, the department could have inflated up to seven rubber dams, turning seven miles of the river itself into a spreading ground.

So far, this much anticipated El Niño has not come close to offering that kind of replenishment.

By the end of the day Monday, Public Works had captured 802 million gallons from the storm, enough water for 19,680 people for one year.

The San Gabriel Coastal Spreading Grounds took in 217 million gallons of that.

It was a modest storm, with a modest catch, not a bad day of fishing for water.