Island of Hope – Island of Tears

Located in the Ellis Island National Museum of Immigration, the American Family Immigration History Center (AFIHC) allows visitors to explore the extraordinary collection of immigrant arrival records stored in the Ellis Island Archives. Searching our archives in the Center or online at LibertyEllisFoundation.org can help inform your own family’s story–inspiring a new sense of your place in the larger story of American immigration.

The Ellis Island National Museum of Immigration is located in the Main Building of the former immigration station complex and tells the moving tales of the 12 million immigrants who entered America through the golden door of Ellis Island. Today, the descendants of those immigrants account for almost half of the American people.

Statue Cruises is the only company authorized by the National Park Service to provide ferry service to Ellis Island. Boats depart from Battery Park in New York and Liberty State Park in New Jersey.

For ferry tickets and schedule information:

The Sites and Exhibits

The 45-minute audio tour, available in nine languages, invites visitors to relive the immigrant experience as if they were the “new arrival” and is ideal for individuals with limited time. Additional tour options describe exhibits in more detail via in-depth interviews with historians, architects and archaeologists. A special children’s audio tour (ages 6-10) is also available in five languages.

The Third Floor Dormitory Galleries are currently hosting “Piecing Together a Changing Planet.” This special exhibit, which runs through May 7, features twenty-six quilts (20″ x 52″) selected by a jury to be “catalysts for conversation” about climate change. Far from utilitarian quilts traditionally used as bedcoverings, art quilts focus on aspects not only of stitching and piecing, but also of layering, “thread-painting” and graphic design. The resultant pieces are often literally and figuratively three-dimensional. Studio Art Quilt Associates (SAQA) Florida and Biscayne National Park, a unit of the National Park Service, have collaborated on the exhibit of textiles that interpret climate change in national parks.

From April 1 – 27, thirteen art quilts (24″ x 36″) created to celebrate the centennial of the National Park Service will be on display in the Third Floor Graffiti Column Corridor at Ellis Island. The quilts were created by Fiber Works, a group of textile artists from the Lincoln-Omaha, Nebraska area, who were inspired by their favorite national park site. The quilts are on a year-long tour of the thirteen chosen parks, and Ellis Island is the fifth stop.

The audio tour, included with each ferry ticket, can be picked up at the Antenna Audio desk on Ellis Island. 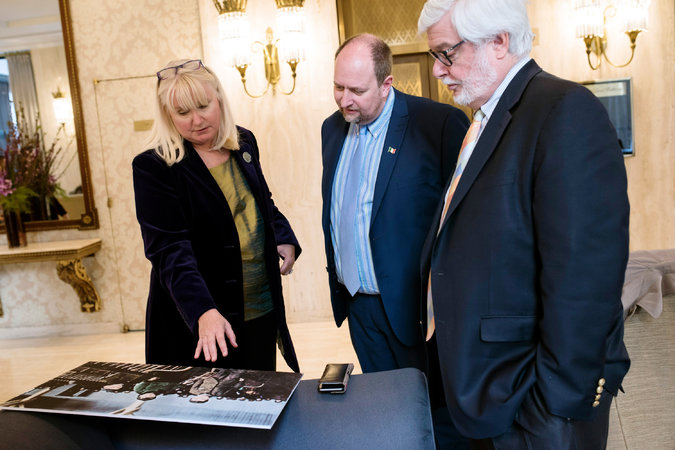 On the first day of January,
Eighteen ninety-two,
They opened Ellis Island and they let
The people through.
And first to cross the threshold
Of that isle of hope and tears,
Was Annie Moore from Ireland
Who was all of fifteen years.

For decades, Paul Linehan, a 47-year-old tenor from Narraghmore in County Kildare, Ireland, would sing those lines from the maudlin Irish ballad “Isle of Hope, Isle of Tears,” but last week, for the first time, he choked on the lyrics.

Mr. Linehan, an adviser to primary schoolteachers, had visited Ellis Island in 2000. He had seen Annie Moore’s statue there and also her likeness in Cobh Heritage Centre (formerly Queenstown) in County Cork where she boarded the steamship Nevada in 1891, on her way to New York, where she became the first immigrant processed when Ellis Island opened. (She was actually 17 at the time.)

But until this month, Mr. Linehan did not know he was Annie’s first cousin three times removed.

“Two weeks ago no one was aware of this connection,” he said. “Annie Moore was just a statue to us.”

“Stories of immigration in Ireland are 10 to a penny,” Mr. Linehan said. “But there was a strong push from my family to build a bridge between the Irish and American cousins.”

The reunion was arranged by Megan Smolenyak Smolenyak, a genealogist who in 2006 was instrumental in debunking the decades-old myth that Annie Moore died in Texas in 1923.

The Annie who died instantly when hit by a streetcar near Fort Worth that year was apparently born in Illinois, and her family had moved to Texas as early as 1880.

For decades, history had the wrong Annie Moore. The story of the immigrant girl who went west became so commonly accepted that even descendants of the Annie Moore who died in Texas came to believe it. Several participated in ceremonies on Ellis Island and in Ireland.

January 2017 is the 125th anniversary of Annie’s arrival in New York, and to kick off the celebration Mrs. Smolenyak took Mr. Linehan and Mr. Shulman, both bearded and burly, to lunch this week at Annie Moore’s, a pub in Midtown Manhattan, and to the Irish American Hall of Fame awards ceremony at the Metropolitan Club, where Mr. Linehan sang “Isle of Hope.”

“I’ve been looking for the Irish cousins for 10 years,” Mrs. Smolenyak said on Wednesday.

“I took my mother’s Bible,” he recalled, “but looking for Moore was like looking for John Smith in the United States.”

The American Moores have become a melting pot. Mr. Shulman’s father is Jewish, and his full name is Michael James Patrick Shulman, an only-in-New York agglomeration.

Both he and Mr. Linehan were struck that more than a century after Annie Moore’s journey, Americans were still debating the influx of foreigners.

“As a financial analyst I can say, Do you have any idea of what this country would be like without immigration?” Mr. Shulman said.

“I go back to Annie Moore and the conditions she left in Ireland,” Mr. Linehan said. “ It’s the likes of Annie Moore coming that made this country what it is.”

Mrs. Smolenyak found that the Annie Moore of Ellis Island fame lived the rest of her life within a few Manhattan blocks, married a bakery clerk, had 11 children and died at 99 Cherry Street of heart failure in 1924 when she was 47.

She was buried in an unmarked grave in Calvary Cemetery in Queens. In 2008, with contributions from Annie’s newfound relatives and from Brian G. Andersson, the city’s commissioner of records, a limestone Celtic cross was dedicated at Calvary Cemetery during a ceremony at which the tenor Ronan Tynan sang “Isle of Hope, Isle of Tears.”