MDFDE/USA: To our GREATEST Champ Muhammad ALI: Floating in Heaven like a Butterfly! #RIPMuhammadAli

The White House
Office of the Press Secretary
For Immediate Release
June 04, 2016

Muhammad Ali was The Greatest.  Period.  If you just asked him, he’d tell you.  He’d tell you he was the double greatest; that he’d “handcuffed lightning, thrown thunder into jail.”

But what made The Champ the greatest – what truly separated him from everyone else – is that everyone else would tell you pretty much the same thing.

In my private study, just off the Oval Office, I keep a pair of his gloves on display, just under that iconic photograph of him – the young champ, just 22 years old, roaring like a lion over a fallen Sonny Liston.  I was too young when it was taken to understand who he was – still Cassius Clay, already an Olympic Gold Medal winner, yet to set out on a spiritual journey that would lead him to his Muslim faith, exile him at the peak of his power, and set the stage for his return to greatness with a name as familiar to the downtrodden in the slums of Southeast Asia and the villages of Africa as it was to cheering crowds in Madison Square Garden.

That’s the Ali I came to know as I came of age – not just as skilled a poet on the mic as he was a fighter in the ring, but a man who fought for what was right.  A man who fought for us.  He stood with King and Mandela; stood up when it was hard; spoke out when others wouldn’t.  His fight outside the ring would cost him his title and his public standing.  It would earn him enemies on the left and the right, make him reviled, and nearly send him to jail.  But Ali stood his ground.  And his victory helped us get used to the America we recognize today.

He wasn’t perfect, of course.  For all his magic in the ring, he could be careless with his words, and full of contradictions as his faith evolved.  But his wonderful, infectious, even innocent spirit ultimately won him more fans than foes – maybe because in him, we hoped to see something of ourselves.  Later, as his physical powers ebbed, he became an even more powerful force for peace and reconciliation around the world.  We saw a man who said he was so mean he’d make medicine sick reveal a soft spot, visiting children with illness and disability around the world, telling them they, too, could become the greatest.  We watched a hero light a torch, and fight his greatest fight of all on the world stage once again; a battle against the disease that ravaged his body, but couldn’t take the spark from his eyes.

Muhammad Ali shook up the world.  And the world is better for it.  We are all better for it.  Michelle and I send our deepest condolences to his family, and we pray that the greatest fighter of them all finally rests in peace.

He shook up the world, and the world’s better for it. Rest in peace, Champ. 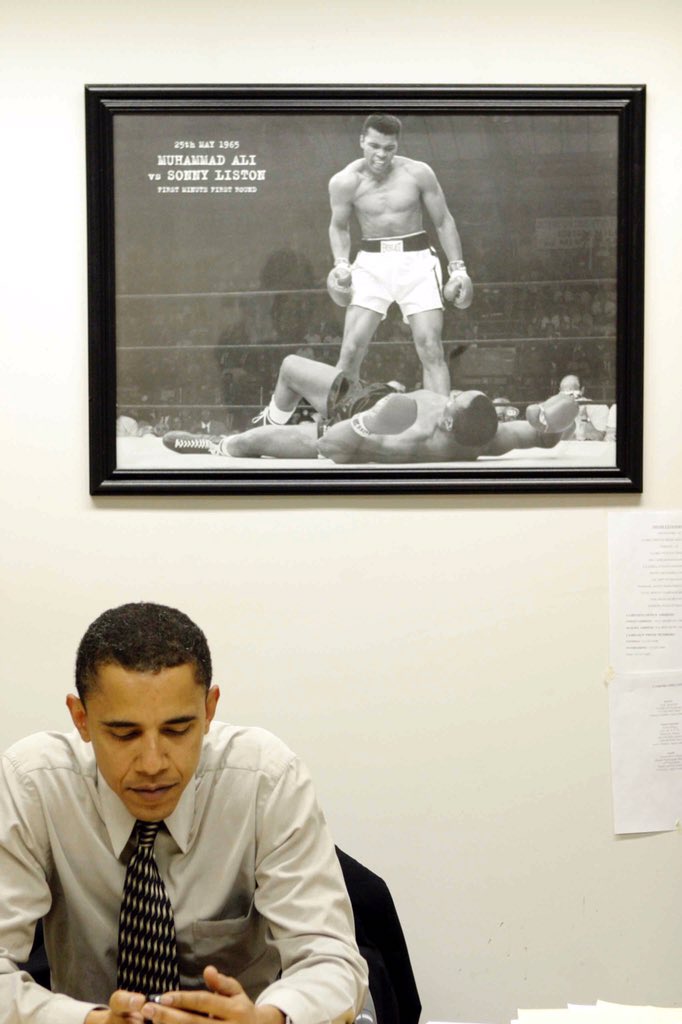 Muhammad Ali, ‘The Greatest,’ dies at 74

Muhammad Ali: ‘Will they remember me?’

Ali’s most provocative moments outside the ring

(CNN) Muhammad Ali, the legendary boxer who proclaimed himself “The Greatest” and was among the most famous and beloved athletes on the planet, died Friday in Arizona, a family spokesman said.

Ali had been at HonorHealth Scottsdale Osborn Medical Center in Scottsdale, Arizona, since Thursday with what spokesman Bob Gunnell had described as a respiratory issue.

“After a 32-year battle with Parkinson’s disease, Muhammad Ali has passed away at the age of 74. The three-time World Heavyweight Champion boxer died this evening,” Gunnell said in a statement. “The Ali family would like to thank everyone for their thoughts, prayers, and support and asks for privacy at this time.”

“And now he has gone home to God. God bless you daddy. YOU ARE THE LOVE OF MY LIFE!” she tweeted.

Longtime Ali friend John Ramsey, who works for WAVE in Louisville and has a radio show on ESPN, was at the hospital with Ali’s family when the boxing legend died.

“When he came into the hospital, we thought, ‘OK, it will be a brief stay’… I think it took a turn for the worse,” he told CNN’s Dan Simon Saturday. “But it was unexpected.”

Ramsey said he didn’t actually see Ali in the hospital Friday. The people who were with the boxing great when he died were “the kids, family only, and I respected that… it’s a very private matter.

“Last night was really for family,” he added.

“She said ‘You might want to come out, which I decided to do,'” he said. But by the time he arrived, “it had become a time for family and family only and I respected that.”

Tributes from around the world

The President said he has a pair of Ali’s gloves on display in his private study off of the Oval Office, just underneath a photograph of the legend.

Obama said Ali “fought for us.”

“He stood with King and Mandela; stood up when it was hard; spoke out when others wouldn’t. His fight outside the ring would cost him his title and his public standing. It would earn him enemies on the left and the right, make him reviled, and nearly send him to jail. But Ali stood his ground. And his victory helped us get used to the America we recognize today,” the President said in a statement issued by the White House.

Don King, the boxing promoter who was every bit as brash as Ali, told CNN that in his mind Ali will never die.

“His spirit will go on forever,” he said. “He’s just a great human being, a champion of the people, the greatest of all time.”

Even as the former champ battled Parkinson’s, he had the same love for life and people, King said. Parkinson’s disease, which primarily affects a patient’s movement, is a “progressive disorder of the nervous system,” according to the Mayo Clinic.

All about Muhammad Ali

“His spirit was solid as ever,” King said. “He wasn’t the man who’d take defeat. Defeat wasn’t in his vocabulary.”

The Ali sense of humor was displayed in an old photo tweeted by Oscar De La Hoya, who won titles in six weight classes.

“RIP @muhammadali, a legend who transcended sport and was a true champion for all. #thegreatest #MuhammadAli,” De La Hoya wrote above an image of Ali whose mischievous eyes proudly watched as his right hand made rabbit ears behind the “Golden Boy’s” head.

Hours before her famed father passed away, Laila Ali posted a throwback photo of Muhammad Ali with her daughter, Sydney, who was born in 2011.

“I love this photo of my father and my daughter Sydney when she was a baby! Thanks for all the love and well wishes. I feel your love and appreciate it!!” Laila Ali, herself a former world champion boxer, wrote.

George Foreman, who Ali defeated in 1974 for the world heavyweight title, wrote on Twitter, “It’s been said it was rope a dope Ali beat me with. (N)o (it was) his beauty that beat me. Most beauty I’ve know(n). loved him.”

Famed promoter Bob Arum wrote on Twitter: “A true great has left us. @MuhammadAli transformed this country and impacted the world with his spirit.”

In recent years, Ali had largely stayed out of the public spotlight. In his last known appearance, Ali appeared at Parkinson’s fundraiser April 9 in Phoenix, according to the Arizona Republic. A photo posted by the newspaper showed Ali wearing dark sunglasses.

He once was known not only for his athletic prowess as a three-time heavyweight champion but also for his social activism.

Ali was born in Louisville, Kentucky, as Cassius Clay in January 1942. He began boxing as an amateur when he was 12 years old and in 1964 became heavyweight champion with a knockout of Sonny Liston. That year he joined the Nation of Islam and changed his name.

Ali’s sparkling career was interrupted for 3½ years in the 1960s when he refused induction into the U.S. Army during the Vietnam War and was convicted of draft evasion. The Supreme Court overturned the conviction.

Ali was prepared to go to prison, King said.

“He stood his ground on who he was. They took him to all kinds of trials and tribulations,” King said. “He’d rather go to jail than break what he believed in.”

During his boxing hiatus, Ali used his fame and popularity to speak out about racism in America.

“At a time when blacks who spoke up about injustice were labeled uppity and often arrested under one pretext or another, Muhammad willingly sacrificed the best years of his career to stand tall and fight for what he believed was right,” Abdul-Jabbar wrote on Facebook. “In doing so, he made all Americans, black and white, stand taller. I may be 7’2″ but I never felt taller than when standing in his shadow.”

Ali went on to win the heavyweight title twice more before retiring for good in 1981.

Funeral services will be held in Louisville, Gunnell said.