Lee Ielpi Board President of the September 11th Families’ Association and co-founder of 9/11 Tribute Center http://tributewtc.org/press

The 9/11 Tribute Center set to get bigger, better

The 9/11 Tribute Center is moving to a new location at 88 Greenwich Street in order to expand its mission, exhibits and programs.

It was created to fill a temporary void Downtown, but ten years later, it’s finding new purpose — and a new venue.

The 9/11 Tribute Center, established a decade ago by victims’ families as America awaited a formal memorial to the 2001 terrorist attacks, recently announced plans to move to a new location at 88 Greenwich St. in order to expand its mission, exhibits and programs.

The center has welcomed 4 million visitors in the ten years since it opened at its current location at 120 Liberty St., according to co-founder Lee Ielpi, president of the September 11th Families’ Association.

The new 9/11 Tribute Center is expected serve up to 1 million visitors every year.

The expanded venue is intended to facilitate a larger mission for the center in the future — going beyond simply mourning the victims of the 9/11 attacks, to highlighting the inspiring national response to the catastrophe, and encouraging a new generation to join in the spirit of community service.

“As we focus on tomorrow, we have to let young people know that through an understanding of 9/11 they can learn the importance of service and contributing to their communities,” said Ielpi, a former firefighter who lost his firefighter son in the World Trade Center collapse. “They can remember and honor those who were lost on 9/11 by participating in acts of service. The expanded exhibits and programs will allow people from around the world to understand and then commit to acts of service to make a difference in their communities.”

Since it opened in 2006, the center has offered visitors to the World Trade Center area a place to connect with people from the 9/11 community —  survivors, family members of lost loved ones, first responders, and people who live and work in Lower Manhattan.

The goal now is to perform this mission and deliver their message to a greater number of visitors so they can learn more about the events of 9/11, the identity of 2,973 people killed in the attacks, the unprecedented rescue and recovery operations and the tremendous spirit of support and generosity that arose after the attacks. The expanded venue will allow for a bigger personal gallery and walking-tour experience for students and tour groups.

Jennifer Adams, the CEO of the center, said the goal is to open the new space in the spring of 2017, but that depends on the foundation raising $7.5 million for construction and another $4 million for exhibition development.

Adams explained that the planned exhibitions would be organized around three themes: the events of 9/11 and the immediate aftermath, the recovery and rebuilding of Downtown, and the outpouring of humanitarian activism in response laying the foundations a legacy of community service.

The latter themes would serve to broaden the center’s focus, according to Adams, to relate the recovery and activism that followed 9/11 to the healing that follows other disasters — for example, an exchange program with Japanese who suffered the twin catastrophes of the 2011 tsunami and nuclear meltdown. 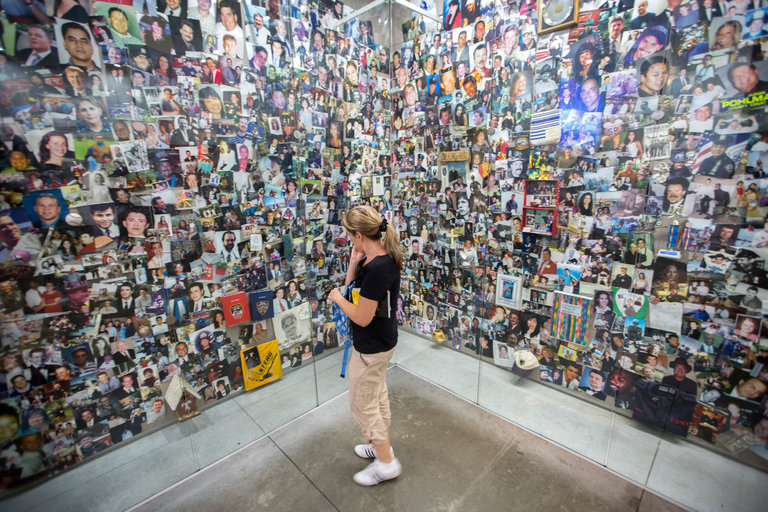 A visitor at the 9/11 Tribute Center looks at photographs of those who died in the 2001 attack. The center opened in 2006 near ground zero. Credit Santiago Mejia for The New York Times

In the years after the Sept. 11 attack, as redevelopment officials bickered about and dithered over the future of the World Trade Center site in Lower Manhattan, thousands of pilgrims came to ground zero from all over the world. They found — nothing.

The 9/11 Tribute Center stepped into this void. The private, nonprofit, ad hoc center was founded in part by Lee Ielpi, a retired firefighter whose son, Jonathan Lee Ielpi, also a firefighter, was killed in the attack.

The center opened in 2006 on a shoestring budget in a former delicatessen at 120 Liberty Street, opposite ground zero. George E. Pataki, who was then the governor of New York, said the 9/11 Tribute Center would offer an “interim destination” until the real museum opened.

Here it is, two years after the National September 11 Memorial Museum opened. Not only is the tribute center still around, it is also to move into a new space nearby, at 88 Greenwich Street, where it will occupy 35,000 square feet, almost three times as much as it has now. The lease runs 36 years.

The announcement is to be made on Tuesday. The new center is to open next spring.

“The memorial museum has done a spectacular job capturing the essence of that day,” Jennifer Adams-Webb, the other co-founder of the Tribute Center, said last week. “Our mission has evolved into long-term recovery and resilience.” 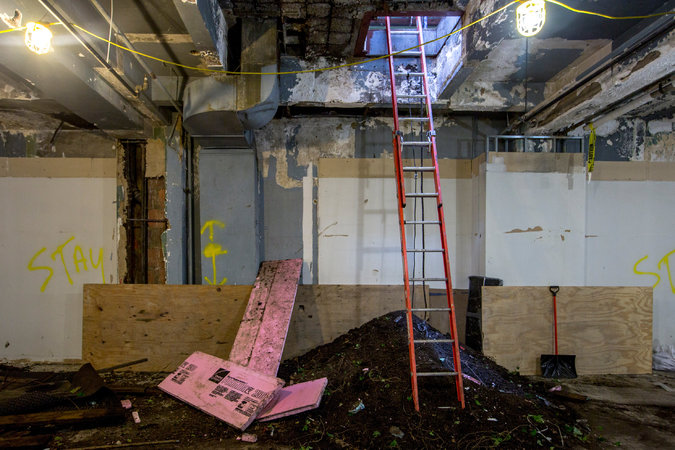 The 9/11 Tribute Center will be moving to 88 Greenwich Street. Credit Santiago Mejia for The New York Times

One-third of the exhibition area will cover the events of Sept. 11 and the immediate aftermath. (Jonathan Ielpi’s turnout coat and helmet are part of this section.) The next third will deal with how survivors dealt with their loss and trauma through philanthropic and voluntary work. And the final third will invite visitors to consider how they might be of service to their own communities.

“We can’t change the past,” Mr. Ielpi said. “I can’t bring my son back. But we can certainly change the future.’”

As important as the space is, the Tribute Center will also continue to organize tours of the Sept. 11 memorial. Its 812 volunteer guides are related to victims of the attack; or they responded to the attack as firefighters, police officers or other emergency workers; or survived the attack themselves; or helped with the cleanup and recovery of the trade center site; or lived downtown at the time.

“Our volunteers not only share their experience of that day,” Ms. Adams-Webb said, “but how they’ve grown from that and where they’ve come to today — how it’s shaped their lives.”

The annual number of visitors to the center peaked in 2011 at 550,000, Ms. Adams-Webb said. Last year, it was 400,000. Paradoxically, tourism in the neighborhood is greater than ever. But the tight confines of the center’s current space prevent it from accommodating large tour buses, she added. That is one reason — besides the expiration of the lease at 120 Liberty Street — it is moving.

Ms. Adams-Webb estimated the total cost of the new center at $7 million. She said Thor Equities, the owner of 88 Greenwich Street, was building the unfinished space at its own expense.

The center still needs to raise about $4 million, she said, most of which would cover the exhibition, which is being designed by the Lee H. Skolnick Architecture and Design Partnership. 9/11 was by far the worst terrorist attack in American history with 2,977 victims (excluding the 19 perpetrators). While the attacks were aimed at the United States, 372 foreign nationals from 61 countries were also victims.

Here’s a list of casualties by country based on data from Wikipedia:

Of the 19 terrorists, 15 came from Saudi Arabia, 2 from the UAE and one each from Egypt and Lebanon. Note none came from either Iraq or Afghanistan.

9/11 is also notable for not only being the worst terrorist incident for the US, but also for UK nationals. More British citizens lost their lives on 9/11 than any single terrorist attack during the troubles, the 2015 Tunisia attacks (30 victims), Lockerbie bombing (43 victims) or 7/7 (52 victims).

It’s also likely the worst terrorist attack for nationals from many other countries on the list where terrorism is not common.

To learn more about the 9/11 attacks have a look at the following books: