Congrats for this latest CNN post featuring your Holberton School! And thanks again for playing such a great part in our very successful Intl. Conference at the New York Law School (NYLS) last month complimenting our unique project #MDFDEJeSuisLadyLiberty130! Can’t wait to work with you guys and Holberton School again in the future! So many ideas, so much we want to do! Keep up the good work!!!  A bientôt!

Programmers are in hot demand. Tech companies are especially eager to grab talent as fast as they can find it.

“We’re interviewing people every week,” said Neha Jain, a senior software engineer with LinkedIn. “Every time we get a great idea at LinkedIn, the question is always — who will work on that project?”

But there’s a problem: Businesses want to bring on more engineers but the pipeline isn’t always market ready. Many young software graduates don’t get hired because they don’t have on-the-job experience.

To help streamline the process of finding stronger candidates, Jain serves as a mentor at the Holberton School, based in San Francisco. 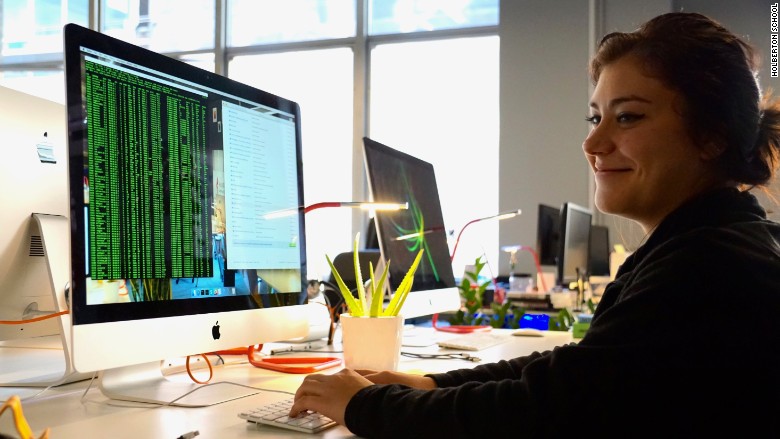 It’s a new two-year college-alternative course for programmers that shuns teacher-led instruction and prepares students for the workplace in half the time of a formal college.

Co-founded in 2016 by Sylvain Kalache — also software engineer and a former colleague of Jain’s — the school offers training you’d typically at a workplace.

“Software engineering is a craft,” Kalache said. “You’re better at it the more you practice. At a four-year college, you’re passively listening to teachers and improving your mind but maybe not your application skills.”

“Technology moves so fast,” he said. “What you learned in your freshman and sophomore year is redundant two years later.” 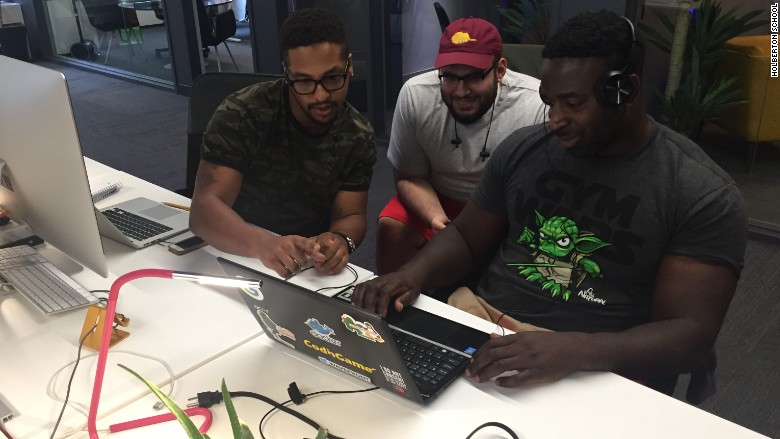 Almost half of Holberton’s students are women and more than half are minorities.

With no formal instruction, the school’s objective is to teach students how to learn both on their own and from peers, similar to what occurs at an office.

The course is split into three parts: Nine months of training on software engineering fundamentals, a six month internship and nine more months focused on specialization.

The school launched with a small cohort of 30 students and offered free tuition. Newer students who don’t pay upfront tuition are now charged a percentage of their salary after they land a job.

“We don’t care about age, race, gender, past professional experience or school experience,” he said. “We removed every kind of human bias from the selection process.”

Instead, candidates are evaluated by how they problem solve, collaborate with others and their eagerness to learn. There’s also an in-person interview with the founders. 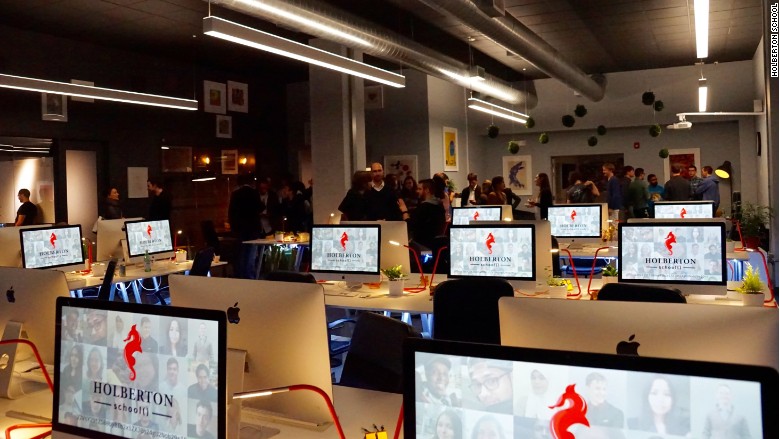 The school in down San Francisco is set up like a startup, with communal work stations meant to facilitate collaboration.

About 40% of students are women and more than half are minorities. Students vary in age — from 18 to 58 — as well as experience.

“Some have no prior programming knowledge,” said Kalache. “We actually prefer it that way.”

The school, which keeps its facilities open 24/7, features classrooms that resemble a startup environment to simulate real-life work scenarios.

Dora Korpar, a 25-year-old student who previously worked an entry-level job at Trader Joe’s, said the program helped her land a lucrative programming job after graduation.

“It was an eye-opening experience,” said Korpar, who didn’t have prior coding knowledge.

Traits, such as being a sharp problem solver and strong math and logical thinking skills, helped her get in to Holberton. Less than a year into the program, Korpar interviewed with a Silicon Valley tech firm and was hired.

Meanwhile, two of her peers were hired by Apple (AAPL, Tech30) after just nine months at the school. One was previously a cameraman with no programming experience, and the other was a help desk representative.

About half of the first cohort of students now have full-time jobs or internships at top tech institutions, including at Dropbox, Docker and NASA. 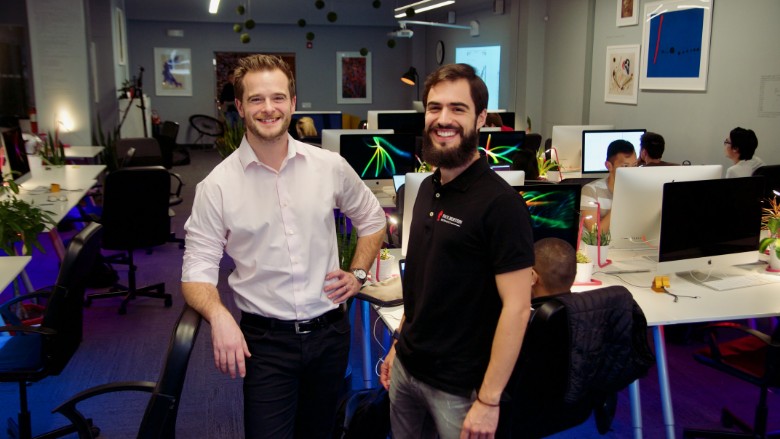 The school also offers a rotating panel of pro-bono mentors — like Jain — from companies such as Apple, LinkedIn and Google (GOOGL, Tech30).

“If the U.S. wants to remain competitive in tech, companies like LinkedIn (LNKD, Tech30), Google, Facebook (FB, Tech30) have to be able to hire local talent quickly,” he said. “If they can’t, they will go to India and China to grow their workforce.”

Visiting @holbertonschool. A coding school created by 3 Frenchmen that brought an

At @holbertonschool, no formal teachers, no lectures! A disruptive school training the next generation of Software Engineers #visit #SF 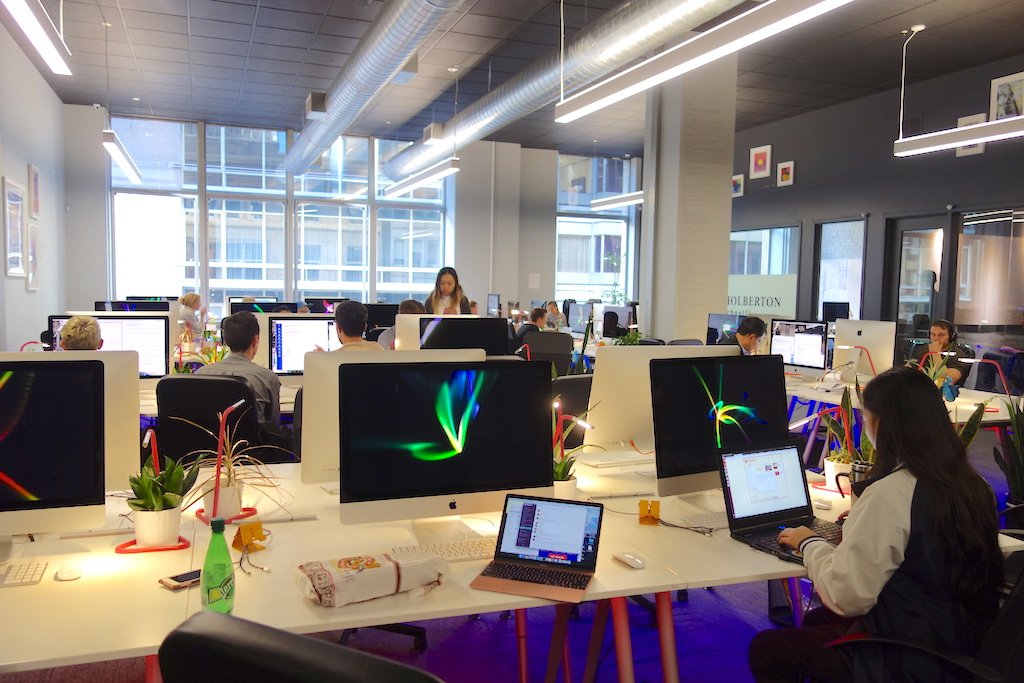 Latest update on our International Conference MDFDE/Paris-NYC16 #MDFDEJeSuisLadyLiberty130 re: Business/Social Entrepreneurship held on October 26, 2016 at New York Law School in cooperation with the Holberton School of Engineering, San Francisco, California.

Tech and community in our distributed world

Mise en ligne le 18 oct. 2016 Julien Barbier and Sylvain Kalache met in San Francisco in 2012. Both French immigrants, they contributed to the Tech and Education industries by building a community, products and a school. From while42, the largest French Tech Engineers Network, to TechMeAbroad connecting Tech talent across borders, to finally creating Holberton School training full-stack software engineers. Sylvain will share the story of how all of this happened and the place it has in our borderless world.

It takes a village… It takes a French-American community from Silicon Valley… Expats from all nationalities around the world helping each other to succeed in this mad, competitive yet fascinating world today…

So, if you missed Sylvain Kalache’s own presentation of his pioneering Holberton School of Engineering San Francisco, Calif. His special video shown during the second part of our very successful first MDFDE Intl. Conference with live streaming worldwide, chaired by Sophie Raven yesterday at the New York Law School…

Here comes YouTube to the rescue… And please share the video with everyone, especially all young students around you because – without a doubt – this is what the future in research and business combined with culture and education for our children and grandchildren, is all about…

One more thing: Kudos to our new French Consul General Emmanuel Lebrun-Damiens in San Francisco! Nice to see such new, bright LEADERSHIP in action on the WEST COAST… all the way to the PACIFIC NORTHWEST, truly working WITH the dedicated French-American and Francophone communities he must nobly represent and warmly support in America…