70 years ago today, the “Voie de la Liberté” (“Liberty Highway”) stretching from Cherbourg, France to Bastogne, Belgium, and made of 1,145 symbolic milestones set along the highway, a “Borne” marking every kilometer along the route taken by the glorious General Bradley’s First Army, and General Patton’s Third Army, after D-Day in Normandy on June 6, 1944, was officially dedicated at Fontainebleau, southeast of Paris by Mr. Paul Ramadier, then-President du Conseil along with Mr. François Mitterand then-Minister of War Veterans, in the presence of Mr. Jefferson Caffery, United States Ambassador to France and members of the American Legion. Many military and civilian dignitaries of the Allied Nations were also present at the ceremonies. Since the dedication of the Liberty Road in 1947, heads of states, many American Veterans (some of them do come every year), their children and grandchildren and millions of international visitors have come to visit these Monuments and to remember… E.J.

“All who travel the “Liberty Road” must sense the spirit of  comradeship and common destiny that strengthened the soldiers of the Allied Forces who fought along that route in 1944. The same firm unity is still necessary if we are to maintain human dignity and worldwide freedom and to secure a just peace for today and tomorrow generations.”

(Translated from the French Declaration read during the 1947 official ceremony).

Note: As part of our ongoing 2-year project #MDFDEFriendshipMerciTrain70 including the celebration of the 75th Anniversary of the Voie de la Liberté, the “Liberty Highway” in 2019, the MDFDE is officially working in cooperation with Mr. Michel Scicluna, Mayor of Auneau-Bleury-Saint-Symphorien (Eure-et-Loir) and the European Voie de la Liberté Committee (France-Belgium-Luxembourg). E.J.

On March 10, 1946, Colonel Guy de La Vasselais, who was French liaison officer to General Patton and his glorious Third Army during WWII, elected Mayor of Saint Symphorien (1945), near Chartres (Eure-et-Loir), and Gabriel Hocquart, Mayor of Metz (Moselle), were personally invited by their brother-in-arms, General Walton Harris Walker, to spend one month in the United States. Needless to say, their trip and stay, especially in Dallas, Texas, was quite memorable (see French article below).

Back in France in mid-April, in June Guy de la Vasselais suggested to Mayor Hocquard the idea–after having suffered so much under four years of German Nazi oppression–of erecting a monument to commemorate the Liberation of France by the American Armies and to honor the soldiers who sacrificed much in so doing: a monument that would symbolize the idea of Liberty.

Between 1947-1952, Mayor DE LA VASSELAIS served as Counselor to the “Union Francaise” (Overseas Territories). He was elected Senator in 1959.

And last but not least, following up on the extraordinary Drew Pearson’s Friendship Train grassroots initiative in 1947, Guy de La Vasselais was named Executive Vice-president of the French Gratitude Train Committee, the “Merci Train” Committee, in 1948.

FYI: Among the 52,000 gifts loaded onto the legendary 49 “40 & 8” boxcars of the Merci Train sent to America in January 1949 were several replicas of the said bornes “Voie de la Liberté” offered by French towns to American towns.

I am proud to say that I have now been able to locate all the original “Merci Train Bornes” along with “Bornes” (the easier part) sent afterwards as project “Bornes in America.” There is still so much researching to do and countless efforts in connecting French and American cities, towns and villages (some of them having never even heard about the Friendship and Merci Trains, let alone these precious “Bornes” also sent as a token of gratitude and friendship) but that’s a fantastic challenge so, “Game on!” E.J.

La Fayette as a lieutenant general, in 1791. Portrait by Joseph-Désiré Court. Public Domain.

In 1775, La Fayette, a young military officer who had embraced the ideas carried by the Enlightenment and had recently acquired Freemason beliefs in Liberty, Morality and Ethics, was taking part in his unit’s annual training in Metz. There he met the commander of the Army of the East, Charles-François de Broglie, marquis de Ruffec (1719-1781), who was helping Beaumarchais in devising a scheme to secretly support the American insurgents in the early stages of their Revolution.

On August 8, 1775, the Marquis de Rufflec organized what became the famous “Diner de Metz”–the actual event, the “meeting of the minds” which forever changed the destiny of the Thirteen Colonies–when the young Marquis de La Fayette, then-19 years old, was convinced by the guest of honour, the visiting Prince William Henry, Duke of Gloucester and Edinburgh, brother of King George III, that the insurgents’ revolt in America, was in some degree justified.

The following year, Louis XVI and his foreign minister, the comte de Vergennes, agreed to supply the American cause with arms and officers to possibly restore French influence in North America, after France’s losses in Canada. When La Fayette heard French officers were being sent to America, he did not hesitate. He chartered a ship with his own funds and was able to finally convince General Washington to take him in his Army… The rest is History…

Originally, the road marker was made of pink cement. Each “Borne” was 1.2 meter high (about 48 inches high) and weighed 435 kg (about 716 pounds each). Circling the top part of the “Borne” on a blue field, are the 48 stars of the American Flag (Hawaii and Alaska were admitted into the Union in 1959); and above each “Borne” is another symbolic design representing the red flaming torch of the Statue of of Liberty surging from the sea, the Atlantic Ocean, over which the American Armies came to Europe.

The 4 red rectangles represent the four sections of the “Voie de la Liberté:” 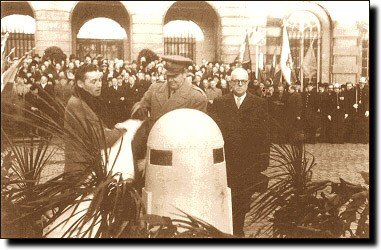 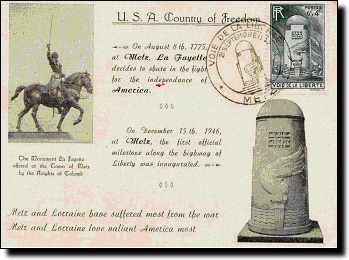 the Allied Forces which liberated France after D-day.

The Liberty Road starts in Normandy at Sainte-Mère-Église and travels across Northern France to Bastogne in Belgium near the border with Luxembourg. It follows one of  the routes taken by the Allieds,  to be precise,  the route taken  by US General George S. Patton.  All along the road, there is a stone marker or ‘Borne’ to mark every kilometer. The road is 1,145 kilometers long with the first “Borne” outside the town hall in Ste Mère-Église and the last one in Bastogne.  The Voie de la Liberté  was conceived by Major Guy de la Vasselais as a Memorial to the Liberation and its grand opening took place on 18 September 1947 at Fontainebleau. 1145 markers are positioned every kilometers some of the main  towns and villages along the route are Sainte-Mère-Église (liberated during the nights of 5 and 6 June 1944), Utah Beach, Sainte-Marie-du-Mont, Cherbourg, Carentan, Saint-Lô , Coutances, Avranches, Saint-Malo, Rennes, Angers, Le Mans, Chartres, Étampes, Fontainebleau (liberated on 23 August 1944), Reims, Valmy, Verdun, Nancy, Metz, Thionville, Luxembourg City, Arlon and finally Bastogne (liberated on 10 September 1944 / 2 January 1945).

On 18 September 2007, to celebrate the 60th Anniversary and as a mark of respect and gratitude towards the American Nation and its soldiers fallen during the liberation of France, the Fontainebleau Military Reserve Cadre Association, ACRPF (Association des Cadres de Reserve du Pays de Fontainebleau)  with the help of  the town of Fontainebleau organized a Commemorative celebration. 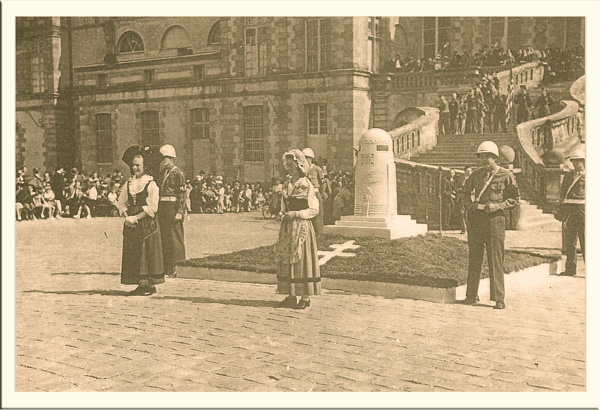 The highlights of the ceremony

The ceremony was based on the one which had taken place 60 years before.
The “Voie de la Liberté Borne” is on a small podium at the bottom of the “Horse Shoe” step of the Chateau of Fontainebleau.
The “Borne” has its own WWII US Military Police guard of honor as well as two young ladies dressed in the folkloric costumes
of the provinces of Alsace and Lorraine.

– The ceremony opened with the raising of the American and French flags by four young children.

– Reading of three texts read in 1947, one of which was the Declaration of General  D Eisenhower.

– Arrival of  three WWII jeeps named Sainte-Mère-Eglise, Fontainebleau and Bastogne. In each jeep, a young boy and a girl held a small jar of earth from the three towns.

a blue pot
in memory of the Ocean crossed and
the town of Sainte-Mère-Église,

a white pot
for the Royal town of Fontainebleau

a red pot
for the bloody battle of the Bastogne

The children then poured the earth from the 3 pots into the Ammunition box.

– The US ambassador representative and the three mayors signed the official parchment marking the ceremony, then it was placed in the ammunition box which was lead sealed and a tricolor ribbon draped around it with the the seal of the town of Fontainebleau.

– The two youngest children deposited the ammunition box at the bottom of the “Borne”.

– Minute of  silence followed by the American and the French National anthems.

– Loading of the “Borne” and ammunition box on an half-track, part of the Military vehicle convoy leaving the Chateau by
the “porte d’honneur” to simulate the departure for the long trip to the USA 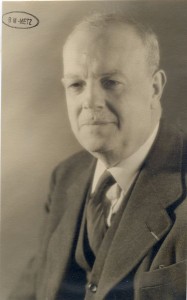 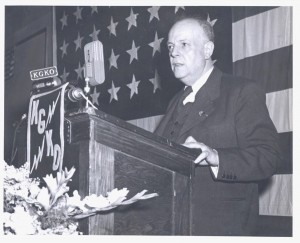 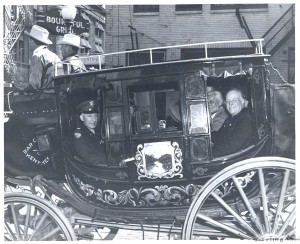 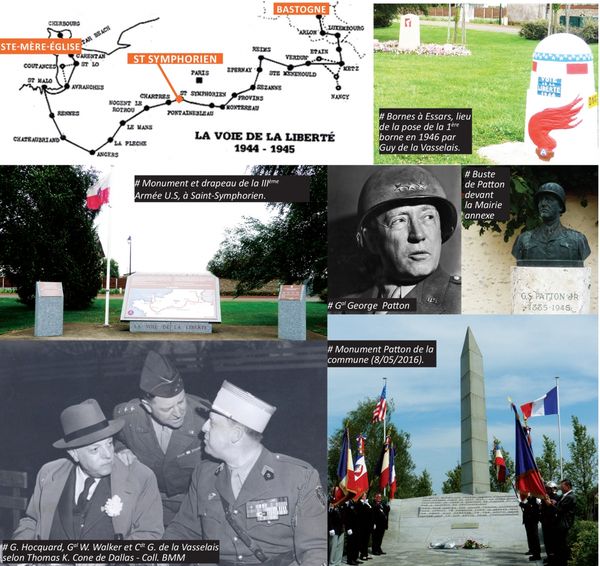 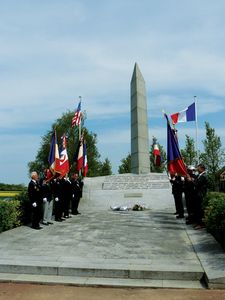 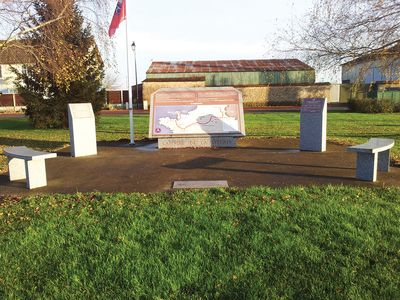