OTD: October 28, 1886: In the name of Freedom and the Marquis de La Fayette… Lady Liberty in all her Glory, brought to you and New York City by the People of France.

131 years ago, a copper statue was dedicated in the spirit of #FrancoAmerican friendship and democracy. Happy Birthday to our one and only! 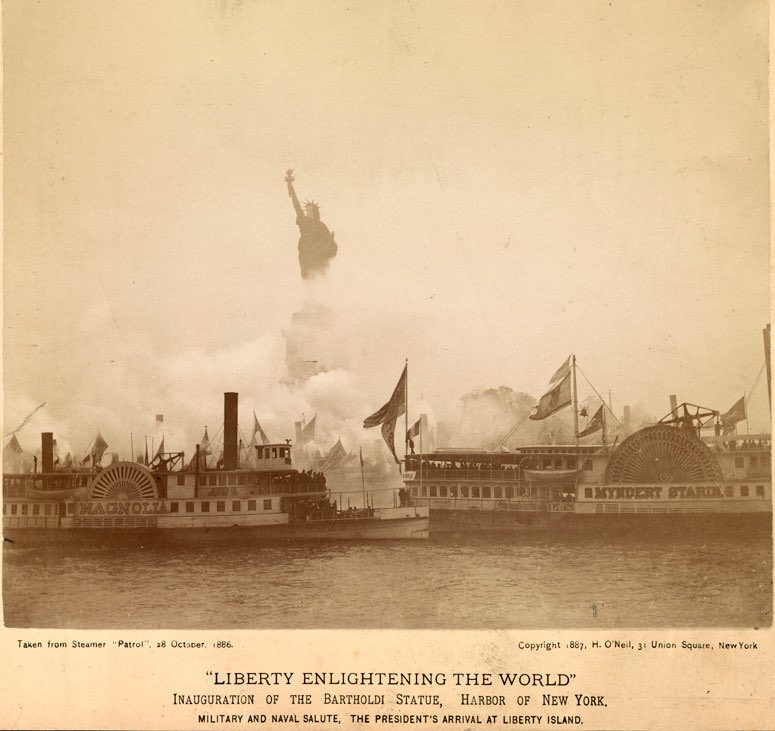 She Was Warned: Nevertheless She Persisted

From American Artists’ Greatest Hits: A Song For EVERY Single Occasion: The Song Heard Round The World!

The Mamas & The Papas – Monday Monday

Long Live the Courage of La Fayette and the Suffragettes!

Monday, Monday by The Mamas & the Papas

Album: If You Can Believe Your Eyes And Ears

While awaiting the release of “California Dreamin’,” band member Denny Doherty was prodding songwriter John Phillips to come up with some new material. Phillips said he would come back in the morning with “A song with universal appeal.” Ignoring the sarcastic comments from the group members, Phillips came up with “Monday, Monday.” It’s about the lousy feeling that comes with the end of the weekend and beginning of another workweek.

In a Songfacts interview, Alan Merrill relates the story of how his cousin – the noted songwriter Laura Nyro – got invited to the Monterey Pop Festival, which was her first major live appearance. Songwriter John Phillips of The Mamas & The Papas called her up and invited her to join them in Monterey. She hung up and told the news to her cousin Alan, who asked “That’s great isn’t it?” Nyro responds, “No, I’ve never done a gig. All I’ve ever done is recording.” She had great anxiety about not having her own stage act. This anxiety, together with the personal problems of The Mamas & The Papas (Doherty was drinking heavily at the time, trying to get over Michelle Phillips and their affair), might have contributed to the gloomy atmosphere cast over the Monterey festival which had such dismal reviews. (Check out our interview with Alan Merrill.)

This was the first Hot 100 chart-topper with a day in the week in the title, and the only one with “Monday.” (“Manic Monday” by the Bangles and “Rainy Days And Mondays” by the Carpenters both stalled at #2.)

Denny Doherty, who sang lead on this song for The Mamas & the Papas thought very little of “Monday Monday” when they recorded it. “Nobody likes Monday, so I thought it was just a song about the working man,” he said. “Nothing about it stood out to me; it was a dumb f–kin’ song about a day of the week.”

As you can imagine, he was taken by surprise when the song became a huge hit.

Doherty wasn’t alone in his incredulity: Mama Cass and Michelle Phillips didn’t like the song either, and John Phillips claimed he had no idea what the song meant.

The Mamas & the Papas used top-tier Los Angeles studio musicians on their recordings. On this track, Larry Knechtel played keyboards, Joe Osborn played bass, Hal Blaine was on drums and P.F. Sloan played guitar. Sloan was the baby of the bunch, just 20 years old when the song was released. He describes it as a “magical session,” and says that he gave Blaine the idea for the drum riff based on a song P.F. had worked on when he was a member of the Grass Roots. Sloan used a tremolo effect on his guitar part, which he overdubbed later.

This was the first #1 US hit by a group comprised of at least two men and two women.

“Monday, Monday” was the group’s third single. “Go Where You Wanna Go” was issued first and went nowhere, but their next release was “California Dreamin’,” which was a phenomenon. When that song was having its run, radio stations started playing “Monday, Monday” off the album, so by the time it was released as a single, it was already widely anticipated and quickly rose to #1.