December 1, 2015 Q&A with Tyler Abell Tyler Abell, editor of The Drew Pearson Diaries: Vol. II, talked about the second volume of his stepfather’s diaries, which provide an insider’s view of Washington, D.C., from 1960-1969. https://www.c-span.org/video/transcript/?id=49302

I am honored and thrilled to inform you that Mr. Tyler ABELL has enthusiastically accepted to join the Comte Gilbert de Pusy La Fayette, our Honorary President, and I, as co-chair of our French-American Executive Committee #MDFDEFriendshipMerciTrain70.

As most of you already know, our very ambitious project, launched last December 2016, will celebrate, in 2019, the 70th Anniversary of the legendary Friendship and Merci Trains, and the 75th Anniversary of the Voie de la Liberté/Liberty Road with a serie of events held in New York City and Paris, France.

And last but not least, Tyler ABELL is the stepson of the famed journalist Drew PEARSON, a “towering figure in American history who has not received nearly as much credit as he deserves,” as Tyler proudly likes to point out, and rightfully so, with whom he was very close throughout his life.

Indeed, Drew PEARSON was a remarkable man who, from his first days as a student at Swarthmore College, PA, stood for the principle that, as an American citizen, it was a duty to do everything possible to make the world safe for democracy. Imagine what he would say, or better yet, what he would dare to write in the name of “free press” he so strongly believed in, if he was in D.C. today! When no one, not a world leader or dictator was ever able to stop Drew PEARSON for speaking out, for reporting the facts!

That’s why he went to Serbia for the American Friends Service Committee to help rebuild Europe after World War I. That’s why, back in 1947, seventy years ago, while he was working night and day, seven days a week, on the “Friendship Train,” his “greatest achievement” (and he had many), he launched with the help of his charming wife Luvie Moore Pearson, Tyler’s beautiful mother, a rousing speechmaker, to rescue starving France and Italy right after the Allies had defeated the Nazis; Drew continued to author his daily, highly popular newspaper column the Washington Merry-Go-Round (all the columns have been digitized by American University and can be read by going to: http://auislandora.wrlc.org/islandora/object/pearson:1).

So welcome aboard the MDFDE, dear Tyler, welcome and thank you so much for helping and sharing your unique knowledge with us (a very special time you lived at the tender age of 15) so the extraordinary story of the Friendship Train – along with the stories of the Merci Train and the Liberty Road – are being told, taught and never forgotten by the People and especially by the younger generation in the United States, France and Italy.

I am truly humble and grateful for the chance you and your honorable family, following in Drew PEARSON’s footsteps, have given the MDFDE so our beautiful, cultural and artistic project #MDFDEFriendshipMerciTrain70 gets all the “steam” and “voltage” it can get to bring a new sense of hope and goodwill to many worried, desperate citizens again.

Indeed, it is very comforting to know that, in good times and bad times, throughout our long and complicated History in and out of Washington D.C., there have been and always will be creative Americans citizens like Drew Pearson to find practical solutions, show us the way in overcoming adversity. From Hollywood, California to New York City and Lady Liberty, to Paris, France: Let’s explore the postwar era for inspiration! Looking forward to working with you, dear Tyler! All aboard the Friendship and Merci Trains! 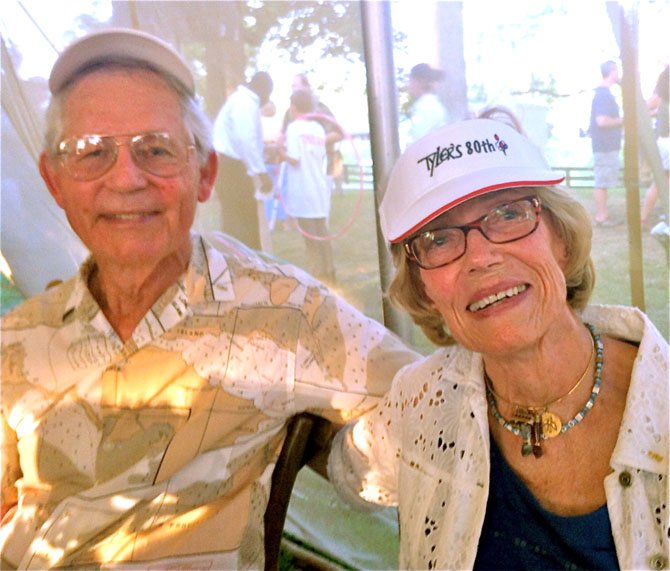 Tyler and Bess Abell share lunch with friends at his birthday celebration, while behind them, friends chat and watch the children try their skills at the hula-hoop. http://www.connectionnewspapers.com/news/2012/aug/08/field-notes/ 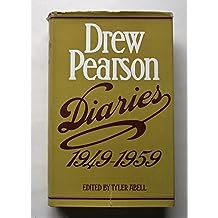 Read All About It – The Miami News Room

BECAUSE JACKIE KENNEDY AVOIDED THE PRESS CORPS SO MUCH, I ENJOYED MAKING CHIN MUSIC WITH BESS ABELL, who ran Lady Bird’s office when LBJ was Vice President. We became good friends and she even called me for lunch when they came to Miami. Bess is a crackerjack, doesn’t meet a stranger.

Back in Miami when President Kennedy was shot in Dallas, I sent condolences and wrote to Bess asking to do an interview with her. I still have her letter on White House stationery: 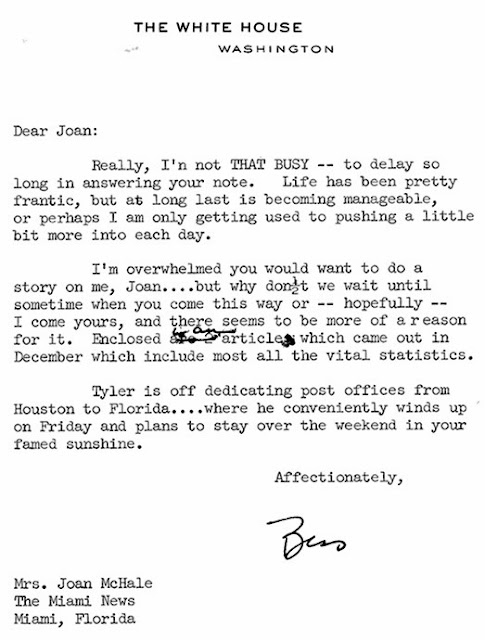 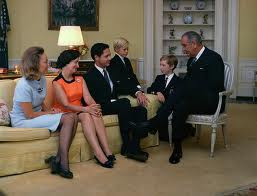 The Johnsons were personal friends; they had hosted Bess’ wedding reception when she married Tyler Abell, (stepson of syndicated columnist Drew Pearson) for she was a close as their two daughters, Lucy and Lynda Byrd.

She was 14 when her family moved into the Kentucky governor’s mansion. After that, Earle C. Clements was elected as Kentucky’s Senator to serve in Washington. He was U.S. Senator at the time of Senate Majority Leader Lyndon B. Johnson’s heart attack. Clements then acted as Majority Leader during Johnson’s recovery.

Young Bess grew up loving Democratic politics. “My father gave me my first sense of political perspective,” she recounted. He had told her to find Kentucky on the huge globe he kept in his office.

Following her marriage to Tyler on Jan. 1, 1955, her husband went into the Army and Bess traveled with him from post to post. “We moved 11 times in 11 months,” she recalled.

After the Army, Tyler went to law school and Bess worked for the Democratic Senatorial Campaign Committee, of which her father was Chairman. Her husband became LBJ’s Associate General Counsel in the Post Office Department.

Their son Dan was 5 and Lyndon, 3 1/2 when she took the White House post. A housekeeper looks after her home affairs. Besides, her mother-in-law, Luvvie Pearson — and her own mother — like to share grandmotherly joys. 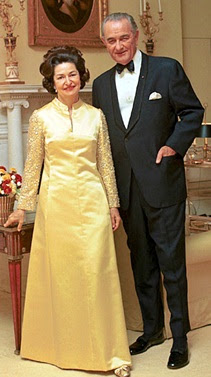