In the ‘Paris of the Appalachians,’ they’re not buying Trump’s climate talk 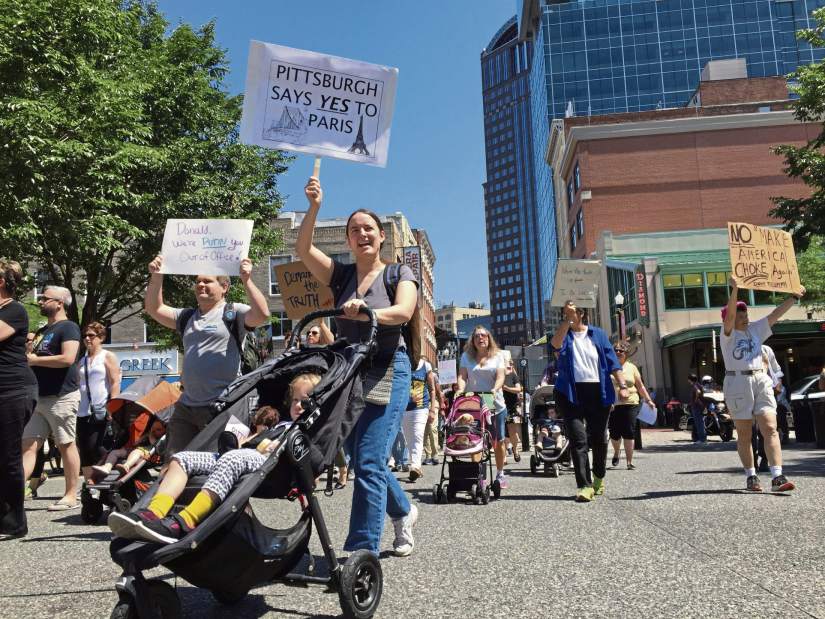 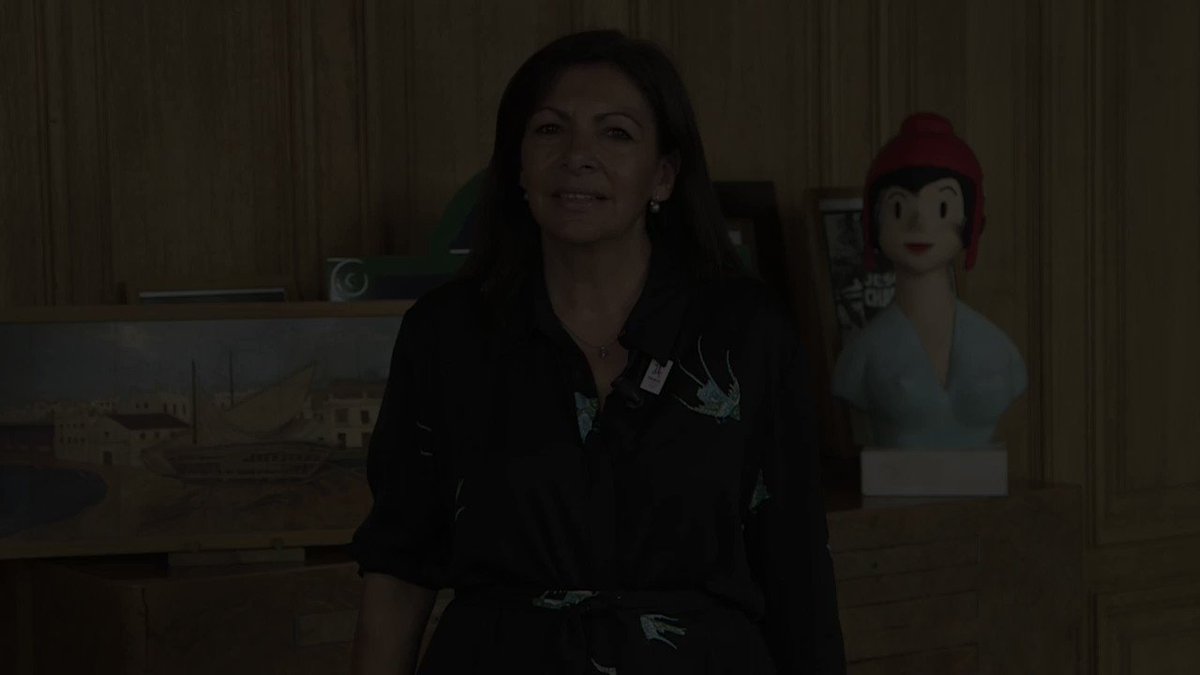 0:24 Anne Hidalgo Compte certifié @Anne_Hidalgo
Hi @BillPeduto, #Paris has a message for you and to all the people of #Pittsburgh. #FromParisWithLove #ParisAgreement #Trump 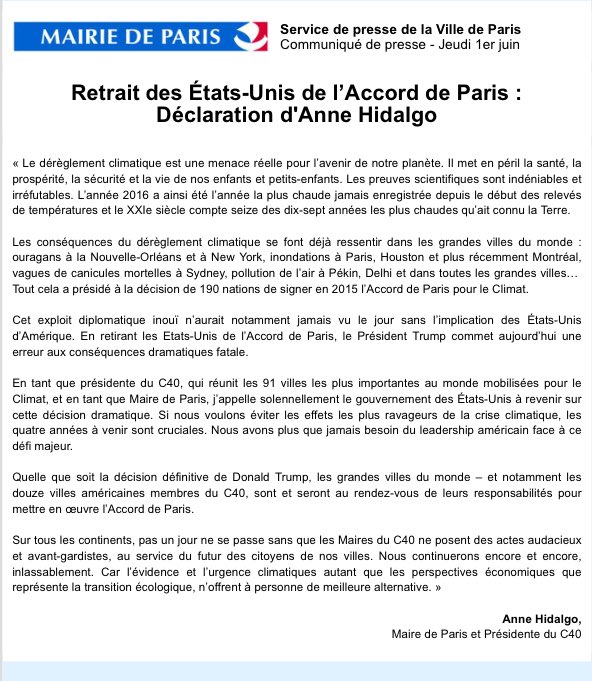 On behalf of the Mouvement des Français de l’Étranger (MDFDE) and all our Green Citizens friends worldwide, I wish to express my sincere congratulations to you and your wise constituents for your inspiring leadership in fully supporting the #ParisAgreement and Paris Mayor Anne Hidalgo, President of @C40Cities and @AIMFrancophones.

As a proud French-American, I thank you very much for reminding us all that, YES, just like for all American Mayors rightfully elected, the Mayor of Pittsburg, PA, is, without a doubt, fully in charge of his own City’s destiny.

Like President Barack OBAMA said it first – loud and clear – two years ago when he signed the #ParisAgreement: There is No Plan B. There is no Planet B. There is no turning back. No additional option: All nations, all communities must unite in saving Planet Earth.

Your stand with Paris and the rest of the civilized world in the fight vs. climate change is especially meaningful to me because it shows, once again in History, how, in the darkest times, Pittsburgh and the Great State of Pennsylvania respond to human crisis and emergencies like climate change, world famine and poverty by joining great international causes.

Indeed, following WWII, 70 years ago, American journalist Drew Pearson, fed up by the division over U.S. aid to Europe in the Truman administration and the Republican controlled Congress, launched “The Friendship Train,” a grassroots relief initiative in cooperation with the National Association of Mayors, which raised over 40 million dollars in aid for war-torn France and Italy traveling across the country from Hollywood to New York City. On December 20, 1947, the much-needed food, medicine and supplies arrived at the Gare Saint-Lazare in Paris via Le Havre, France.

Pittsburg and everyone in Pennsylvania was there to answer the call (please see Pennsylvanian Dorothy R. Scheele’s website “The Friendship Train of 1947” to learn more about it):  http://www.thefriendshiptrain1947.org/friendship-train-history-pennsylvania.htm

With last but not least my Pennsylvanian friend, Gabrielle Griswold, now 91-year young, whose own mother had served France right after WWI, who worked for American Aid to France, Inc. (originally American Relief for France) in Paris, France in 1947-1948, taking a very active part in the Friendship Train with Drew Pearson (please read the moving story of this great Pennsylvanian lady here): http://www.thefriendshiptrain1947.org/friendship-train-history-france-memories.htm

And because History has a very sneaky way of repeating itself and we all have a duty to educate ourselves as well as the new generation of French, Americans and global citizens, and never stop defending Freedom, our civil liberties…

I am very pleased to solicit your support for our #MDFDEFriendshipMerciTrain70, a huge project to celebrate the 70th Anniversary of the American Friendship and French Merci Trains – the Gratitude Train sent by France to the United States in 1949 to thank Americans for their help and sacrifices during both WWI and WWII – and the 75th Anniversary of the Voie de la Liberté/Liberty Road in New York City in 2019.

I will personnally contact every other State, town and city that took an active part in the legendary “Friendship Train and Merci Trains” to also get on board schools, veterans, cultural and artistic associations later on this year. Until then… Thanks again, Mayor Peduto and everyone in Pittsburgh and Pennsylvania (with a special hello and thanks to the Pennsylvania Branch of the 40 & 8 Society and American Legion and Everyone at Indiantown Gap Military Reservation & the Pennsylvania National Guard Military Museum for their service and in preserving their Merci Train boxcar and memories) for your help and friendship. Until we get a chance to meet and maybe plan a very special “Pittsburgh and Paris rally!” Go Pittsburgh! Go Steel City! 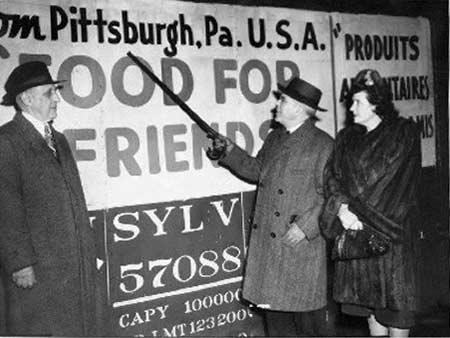 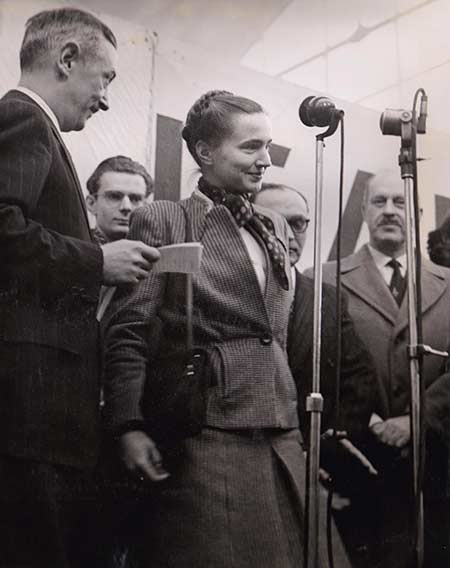 Ms. Gabrielle Griswold, then 21-year old, at AAtF headquarters in Paris, France (1947) with Drew Pearson on the right. http://www.thefriendshiptrain1947.org/friendship-train-history-france-memories.htm

This 40 & 8 Boxcar is one of forty nine cars that comprised the Merci or Gratitude Train, a gift to the American people from the citizens of France.  Pennsylvania received it at a ceremony in Harrisburg on February 6, 1949.  All forty-eight states received a boxcar filled with gifts, ranging from humble offerings to priceless art and antiques. The District of Columbia and the Territory of Hawaii shared the forty-ninth car. Gifts of sacrifice from individuals conveyed each donor’s depth of gratitude to America for liberating France in two World Wars and for sending the friendship train. A $40 million food relief effort carried out by American volunteers in 1947, which saved many French citizens from starvation.

The 40 & 8 Boxcars, so named because of their capacity to hold either 40 men or 8 horses, transported soldiers and horses to and from French battlefields during World War I. Many World War II soldiers rode the boxcars as well. The Merci Train boxcars now stand as a tribute to the sacrifices and bravery of American veterans who served in France in two World Wars and as a symbol of friendship and gratitude between the people of the United States of America and the Citizens of France.

PITTSBURGH (KDKA) – Mayor Bill Peduto has issued an executive order a day after pledging Pittsburgh would continue to follow the guidelines of the Paris Climate Agreement.

The move comes after President Donald Trump announced the United States would be pulling out of the Paris Climate Accords of 2015.

“For decades Pittsburgh has been rebuilding its economy based on hopes for our people and our future, not on outdated fantasies about our past. The City and its many partners will continue to do the same, despite the President’s imprudent announcements yesterday,” Mayor Peduto said in a statement.

According to a press release, the executive order will ensure the City of Pittsburgh adheres to the following:

Later, joining with other states and countries, Pittsburgh bathed some of its landmarks in green light. City Hall went green Friday night in support of the Paris Agreement and the mayor’s order.

As well as the Rachel Carson Bridge —

Other landmarks around the world have done the same over the last two days, including One World Trade Center and City Hall in New York, Boston’s City Hall, Washington DC’s municipal building and City Hall in Paris, France, among others.

Trump mentioned Pittsburgh multiple times during his speech on Thursday saying, “I was elected to represent Pittsburgh, not Paris.”

Near the end of his speech, Trump referenced Pittsburgh for the second time.

“It is time to exit the Paris accord and time to pursue a new deal that protects the environment, our companies, our citizens and our country,” he said. “It is time to put Youngstown, Ohio, Detroit, Michigan, and Pittsburgh, Pennsylvania, along with many, many other locations within our great country, before Paris, France.”

Peduto called the decision “disastrous for our planet” and said Trump’s decision “has made America weaker, and the world less safe.”

CBS’s Kelli O’Hara has the latest from Washington DC —

On Friday, Trump’s campaign announced there would be “Pittsburgh, not Paris” rally near the White House.

But right here, in Pittsburgh, a “March for Truth: Pittsburgh Says Yes To Paris” has been announced for Saturday, June 3 from 11 a.m. to 12:30 p.m. at the City-County Building.

Office of the Mayor

By Direction of: William Peduto, Mayor

WHEREAS, climate change is a worldwide problem recognized by government, business and academic leaders;

And WHEREAS, protecting our planet is of utmost importance to our children and grandchildren, who are at threat of living in a world with dangerous increases in temperature, coastal destruction and violent weather events;

And WHEREAS, 195 countries, including the United States, vowed to address climate change in agreements reached in Paris in December 2015 (the “Paris Agreement”);

And WHEREAS, the Mayor represented the City of Pittsburgh in Paris as part of a global coalition of mayors who recognize the catalyzing potential of urban areas to significantly curb emissions;

And WHEREAS, a more sustainable future will increase our economic competitiveness as a region, not detract from it;

And WHEREAS, the City of Pittsburgh paid a heavy price for our history of heavy industry, including remediating decades of pollution to our neighborhoods and hillsides and overcoming a collapse of our local economy;

And WHEREAS, the City of Pittsburgh has been a shining example of what the Paris Agreement could mean for governments seeking to revitalize their environment and promote and strengthen their economy;

And WHEREAS, the City of Pittsburgh has long been at the forefront of local government and individual citizen activism to protect our environment, from the nation’s first local Clean Air legislation passed by Mayor David Lawrence in 1949 to the worldwide environmental advocacy of Rachel Carson,

And WHEREAS, the City of Pittsburgh actively participates in the 100 Resilient Cities program, attempting to make our residents ready for the environmental, social, and economic disruptions of the future;

And WHEREAS, the City of Pittsburgh has created and adopted a P4 framework which establishes the benefit for people, the shared responsibility for the place we call home, the stewardship of our common planet and the need to measure performance as way to advance improvement;

And WHEREAS, President Donald Trump’s unfortunate action yesterday of seeking to withdraw these United States of America from the Paris Agreement, constitutes a serious dereliction of our moral duty to the planet, threatens the legacy of a sustainable environment for our children, weakens our nation’s global and economic leadership at a crucial time in our history, and leaves it to mayors, in a global partnership of cities, to take immediate and permanent action;

1. The City of Pittsburgh hereby endorses and remains fully committed to the principles of the Paris Agreement.

a. As a member of the Mayor’s National Climate Action Agenda (NNCAA), we join with 81 other cities and 39 million Americans in reaffirming our commitment to the goals enshrined in the Paris Agreement.

b. Working with the other members of NNCAA, the Chief Resiliency Officer of the City is empowered to undertake additional actions to meet the 1.5 degrees Celsius target.

2. The City of Pittsburgh hereby endorses and remains fully committed to our Climate Action Plan and our 2023 target of Greenhouse Gas reduction.

4. The City of Pittsburgh hereby endorses and remains fully committed to our 2030 objectives, as announced during the Paris summit:

5. The City of Pittsburgh hereby endorses and remains fully committed to quantifying the impact of the City’s work in reducing Greenhouse Gas Emissions and building a more sustainable City.

a. Through the completion of the Pittsburgh Climate Action Plan 3.0, the Chief Resiliency Officer shall coordinate and document the impacts of GHG reduction and air quality improvement effects of the initiatives already happening across the City of Pittsburgh’s departments and associated authorities, including but not limited to:

All City departments and authorities under the Mayor’s jurisdiction shall work cooperatively to ensure the success of the missions outlined above. Independent agencies, City-affiliated entities, and City-related institutions are also strongly encouraged to work to help advance these efforts and adopt similar initiatives, where applicable.  All actions and outcomes shall be in accordance with applicable local, state, and federal laws.

This Executive Order shall take effect immediately and remain in effect until amended or rescinded in writing by the Mayor.