70 years ago this coming November 7… Here Came the Friendship Train in Frankfort, the Capital City of the Commonwealth of Kentucky…

MERCI KENTUCKY and to your late Gov. Earle C. CLEMENTS for Your Leadership and Generosity in the Darkest Times! E.J.

The Courier-Journal from Louisville, Kentucky on Monday Morning October 27, 1947 …

THE WASHINGTON MERRY-GO-ROUND By Drew Pearson Washington. (…) that the nation’s leadership came entirely from Washington. The people of the U.S.A., it was said, got into the bad habit of sitting on their hands, doing nothing for themselves. ‘Whether true or false, some healthy signs are now apparent that the American people are quite capable of acting on their own. ‘-
One of them is the Friendship Train. With no help from the Government whatsoever though with hearty White House approval it has now been decided that the Friendship Train will definitely roll.
It will leave Los Angeles November 7 with an engine, a caboose and a boxcar to collect food from the plain people of America for the stricken people of Western Europe. The first stop will be Bakersfield, where it is hoped another boxcar will be added, and so on across the continent. Judging from the response from all sorts of people including railroad presidents, housewives, farmers, a thundering demonstration of the generosity of America will roll across the great plains, showing the people of Europe that help in “their hour of need comes not from closed-door diplomatic conferences, but from the heart of America. AND most important of all is the fact that the Friendship Train is almost entirely spontaneous. It is the sort of thing that couldn’t happen in Russia, because in Russia it is only a handful of men who decide whether wheat shall move to France, and then go out and collect what they need from the Russian peasants. – And when the Russian people are able to start a spontaneous friendly movement such as this, then there will no longer be any danger of war between our two countries. Also, if the people of Western Europe get the full significance of this American generosity, there won’t be any doubt as to whose side they will be on.”

TWO YEARS LATER… Via Its MERCI TRAIN, the People of FRANCE truly showed the People of AMERICA what #FRIENDSHIP & #GRATITUDE Was ALL About… 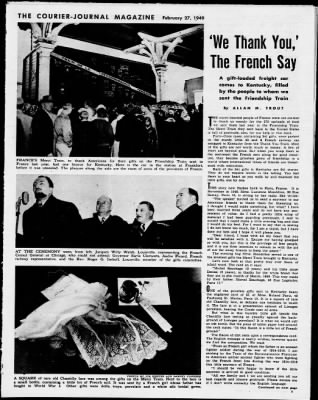 The Clements Awards presentation is just one display of a legacy of giving back started by Earle C. Clements and continued today by his daughter, Bess Clements Abell, and her family.

LEXINGTON, Ky. (Aug. 9, 2017) — When the National Archives and the University of Kentucky Libraries Wendell H. Ford Public Policy Research Center present this year’s Earle C. Clements Innovation in Education Awards to three Central Kentucky history/civics educators at 4 p.m. today (Wednesday), at the Special Collections Research Center Great Hall, in the Margaret I. King Library Building, it will be just one more display of a legacy of giving back started by Clements and continued today by his daughter, Bess Clements Abell, and her family.

The Clements Award honors the life and career of Earle C. Clements and his lifelong commitment to education and public service. Clements’ political career included service as a county sheriff, clerk and judge; terms in the state senate and as governor; and terms in both the U.S. House of Representatives and U.S. Senate, where he was a close colleague to future President Lyndon Baines Johnson.

Made possible by a gift from Bess Clements Abell, Earle Clements’ daughter and a member of the UK Libraries National Advisory Board, and her husband, Tyler, the Clements Award has been presented to the best Kentucky history/social studies/civics teachers annually since 2015.

The Clements Memorial Endowment will be used to organize an Earle C. Clements lecture/symposium that will feature renowned speakers or scholars in the areas of public policy, government and archives and provide opportunities for Earle C. Clements graduate fellows or interns to present their research, while honoring Clements’ impact on 20th century public policy and government. The endowment will not only fund the lecture series, but it will also tie together the other Clements projects.

Bess Clements Abell is a native of Morganfield, Kentucky. She attended public schools in Kentucky and Washington, D.C., when her father served in Congress. Bess graduated from Ward-Belmont High School in Nashville, Tennessee. She earned her bachelor’s degree in political science from UK.

In 1960, Bess served on the Presidential Inaugural Committee. She became secretary to Lady Bird Johnson in 1960 and held that position until 1963 when she became White House social secretary. Between 1969 and 1976, Bess planned special events and served as executive director of the Democratic Governors’ Conference. In 1977, she became executive assistant to Joan Mondale in the Office of the Vice President.

After several years of public service, Bess established Bess Abell Enterprises, a public relations firm in Washington, D.C. Since 1990, she and her husband, Tyler, have developed Merry-Go-Round Farm, a residential community near Washington, D.C. Bess and Tyler have two sons and four grandchildren.

UK is the University for Kentucky. At UK, we are educating more students, treating more patients with complex illnesses and conducting more research and service than at any time in our 150-year history. To read more about the UK story and how you can support continued investment in your university and the Commonwealth, go to: uky.edu/uk4ky. #uk4ky #seeblue

The 40-et-8 boxcar was a standard European Box Car made in France and used during WW1 and WW2. During both wars, the boxcar was used to transport 40 soldiers or 8 mules and horses around Europe. This car was built in Lyons, France in 1905 or 1908 (?) for use on the Paris – Lyon – Mediterranean Railway (PLM.)

After WW2 the French people donated one car to each state plus one to be shared by the District of Columbia and the Territory of Hawaii. The boxcars were filled with items of appreciation that may have included crafts, food, art, and gift items. In 1949 the cars were presented to each of the states.

This 40-et-8 car was given to Kentucky Railway Museum in 1958. Between 1997 and 2001 the Nelson County Technical Vocational School located in Bardstown, Kentucky restored the car to its original state under the supervision of Mr. Chris VerDow.

The Plaques that are displayed on each side of the boxcar represent the Provinces of France. The car was returned to Kentucky Railway Museum in May 2001 where it is on display.

Funding for the restoration project was provided in part by the Kentucky Order of Colonels and the 40-et-8 Society of Elizabethtown. For more information, please see www.rypn.org/. http://www.kyrail.org/boxcar.asp