Dear Members of the MDFDE,

This week was marked by a dark, sad day in California and in our nation’s history. Indeed, as Wednesday, February 19, 2020 commemorated the 78th anniversary of President Franklin D. Roosevelt‘s signing of Executive Order 9066 in 1942, a controversial WWII policy that set the stage for the relocation and internment of 120,000 people of Japanese ancestry — most of whom were American citizens — living on the West Coast and Hawai’i…

It reminds us how fragile our own citizenship could be when patriotism is challenged during chaos at home and abroad, during wartime… It exemplifies our URGENT need to stand UNITED vs. adversity… When current leaders are literally losing their minds in conspirancies theories of their own making so they would divide us in order to restrain our hard-won liberties…

In such sadness and painful times in our AMERICA… Let’s Not DESPAIR! Fingers crossed, Everyone! HAPPIER DAYS will be here again SOON!

Meanwhile… What a better way to get us all enlightened than by celebrating our diversity with a much happier denouement, right? So here is a one of a kind EXTRAORDINARY story that all Americans and especially immigrants, new American citizens, will REALLY appreciate because it could only happen in the United States… The inspiring story about the “new Sheriff in town,” the well-deserved rise of San Francico Sheriff Paul MIYAMOTO, born and raised in San Francisco.

While researching and learning more about Sheriff MIYAMOTO and his other remarkable Family members, I noticed the name of Mitch MIYAMOTO, one of his grandfather’s brothers who, along with Shig MIYAMOTO and George MIYAMOTO, served in the legendary 442nd Regimental Combat Team aka “Go For Broke” (see article below): 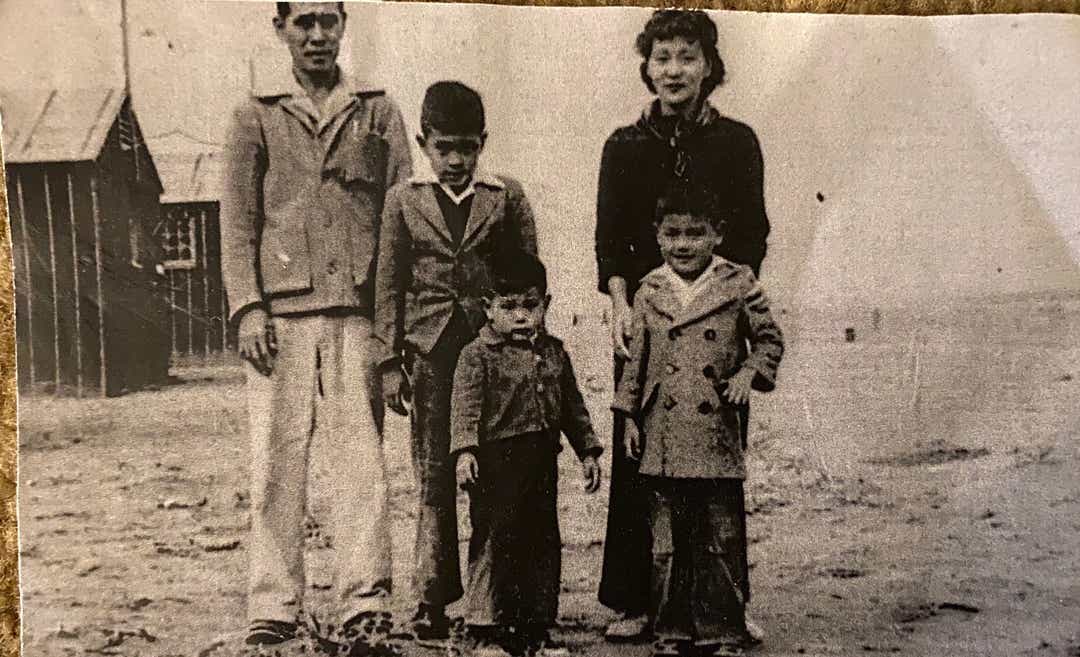 This photo dates back to the time during World War 2 when the family of current San Francisco County Sheriff Paul Miyamoto — the first Asian-American sheriff in California history — were interned along with thousands of other Japanese-Americans, in their case at the Heart Mountain detention center in Wyoming. From left to right, back row: Sheriff Miyamoto’s grandfather, Joe Miyamoto; Miyamoto’s father, Phil; and his mother, Asaye Mae Miyamoto. Front row (left to right): Miyamoto’s uncles, Keith Miyamoto and Donald Miyamoto. Phil Miyamoto wound up becoming a California appellate court judge. Courtesy of Sheriff Paul Miyamoto https://eu.usatoday.com/story/news/nation/2020/02/16/first-asian-american-sheriff-california-vows-protect-immigrants/4693235002/

“Did they give up? Of course not. In fact, my grandfather’s three brothers, Shig, Mitch and George, enlisted and proudly fought for the United States as part of the most decorated unit in U.S. military history, the 442nd Regimental Combat Team.” San Francico Sheriff  Paul MIYAMOTO. https://eu.usatoday.com/story/news/nation/2020/02/16/first-asian-american-sheriff-california-vows-protect-immigrants/4693235002/

Indeed, in reference to his great uncle Mitch MIYAMOTO, could Sheriff Paul MIYAMOTO possibly be talking about THE Mitch MIYAMOTO, the Technical Sergeant of the 3rd Battalion, 442nd Infantry Regiment, who actually designed the shoulder sleeve insignia depicting the torch of Liberty on a blue background with red and white borders – the symbolic flame borrowed from the design of our iconic Statue of Liberty that was also used to design the LIBERTY ROAD markers sent via the French Merci Train to the United States in 1949 – which was approved for wear on December 16, 1943? (see our Post below re: the late Pierre MOULIN/The Liberation of Bruyères (Vosges) France by the 442nd Regimental Combat Team/Torch of Liberty Story/ Mitch Miyamoto).

The Shoulder Patch symbolizes the crusading spirit of the men who chose the design depicting the flaming torch of liberty held high.  This signifies their willingness to take up arms for the defense of all people regardless of race or color. Designed by Technical Sergeant Mitch MIYAMOTO in 1943. http://gfbassn.org/history-of-the-patch.html

In any case…. From the bottom of my heart…

for serving in the heroic 442nd Regimental Combat Team which defeated the Nazis in some of the worst WWII war zones – from the bloodiest BATTLE OF MONTE CASSINO, Italy, to the BATTLE OF BRUYERES, France. E.J.

So, in honor of these distinguished, patriotic Asian Americans, Japanese Americans soldiers… Let’s Hear it for Sheriff Paul MIYAMOTO. Let’s send him, his Sheriff Office Team and his beautiful Family our best wishes of success in the next four years!

Let’s also Hear it for SAN FRANCISCO! Let’s Hear it for our Beloved CALIFORNIA Leading The #RESISTANCE to Action! And last but not least… Let’s Hear it for LADY LIBERTY and her FLAMING TORCH turning 134-year-old this coming October 28, 2020! JUSTICE Will PREVAIL! We Must Believe That Whenever in Doubt (which for most of us humans happens at least once a day, rain or shine, with the latest, most cruel news until we take a deep breath and exhale…). So Hang Tough, Everyone! We Got Each Other! All Aboard! 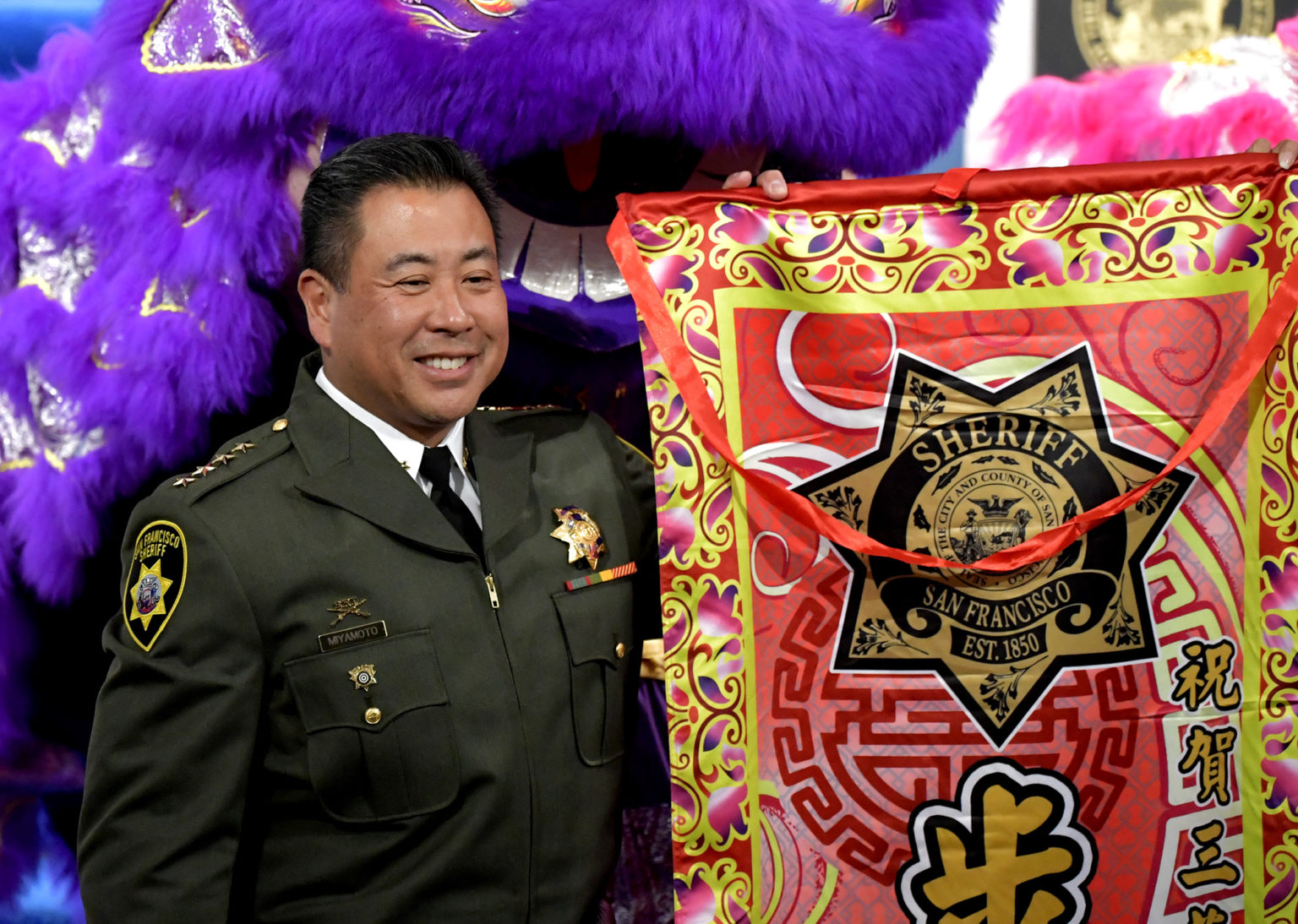 Paul Miyamoto holds a banner after a lion dance that celebrates his inauguration as San Francisco Sheriff at City Hall in San Francisco, Calif., on Wednesday, January 8, 2020. (Ching Wong/SFBay.ca)

CBSN Bay Area spoke with San Francisco Sheriff Paul Miyamoto, the first Asian-American sheriff in California, about his department’s agenda and how he plans to work with city officials and the community. Interview with Kenny Choi.

The Mamas & The Papas: California Dreamin’

Tony Bennett – I left my heart in San Francisco

“This stain on our history should remind us to always stand up for our fellow Americans, regardless of their national origin or immigration status, and protect the civil rights and liberties that we hold dear.”

FRIENDLY REMINDER: FROM AFRICA… FROM NORTH AMERICA AND SOUTH AMERICA… FROM EUROPE… FROM ASIA… FROM OCEANIA…

HERE ARE SOME OF THE REAL STORIES COMPLIMENTING THE HISTORY OF AMERICAN IMMIGRATION — SHOWING THE WORLD THE HUMAN VALUE OF NEWCOMERS WHO MADE AND WILL CONTINUE TO MAKE AMERICA SO GREAT AND SO UNIQUE AS A DEMOCRATIC NATION! E.J.

MDFDE/USA: Nov. 6: Saving AMERICA: Here Is To You LADY LIBERTY & To You… Ms. Barbra STREISAND! #MDFDEJeSuisLadyLiberty132